Checked out the hot new wine country brewery, Hopmonk Tavern, with two of my favorite ladies after a long float yesterday with in the Russian River (where, incidentally, we had some entertaining floatie wars with some of the kitchen folks from Healdsburg's Cyrus Restaurant). 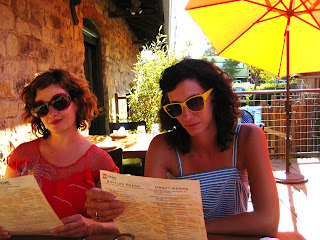 Situated in downtown Sebastopol on the 116 near Whole Foods and Sushi Hana, Hopmonk was opened by Dean Biersch (co-founder of SF's Gordon Biersch) in April 2008 to a fair amount of media buzz.

We were a little dazed from a day in the sun, so we just had a round of beers and ordered a few dishes to share off of the menu of upscale pub food. 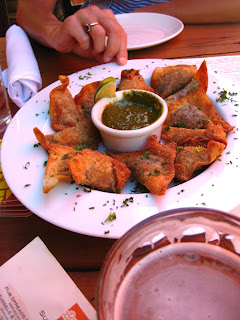 Gimme Some Mo-sa
These lentil-stuffed samosas were inordinately good despite employing wonton wrappers, a technique deemed a bit odd by Nicole, the private chef at the table.

No matter. We all agreed that odd can taste fabulous, especially with fresh-pulled Hopmonk Tavern ale (a Cali-style pale ale), Hopmonk Dunkelweizen (Bavarian-style dark wheat), and Pliny the Elder (strong and familiar) on tap. Loved the pale ale, found the Dunkelweizen a bit *too* smooth on the palate, and always love the Pliny, despite its hangover-accelerating nature.

The accompanying cilantro-lime chutney was so delicious I harbored fantasies of sneaking into the pantry station and making off with a lexan tub full of it. 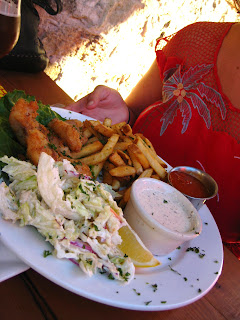 The Fry's the Limit
Hopmonk's fish and chips ($14) plate was mediocre, unfortunately; the cod was good, but the fries were lukewarm and rubbery, and the coleslaw needed acid. The housemade tartar sauce was mega-tasty, but the little ramekin of cold marinara sauce on the side was puzzling.

Our very nice server offered to bring us a fresh plate of fries, but we were feeling too lazy from the river (a.k.a. summer camp vacation paradise) to even worry about it. 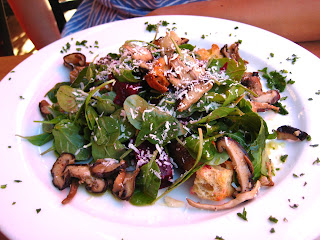 Lemony Snicket
Funny: this salad with beets, wild mushrooms, arugula and shaved goat jack suffered from an acid overdose, actually; the lemon-olive oil dressing was far too tangy, which seems impossible since I usually go bonkers with the lemon juice at home.

I know, I know. I should have just ordered a burger like any good pubgoer, especially since I've been following the recent slew of upscale gastropub openings (Magnolia and Urban Tavern for example). It always comes back to the burger. 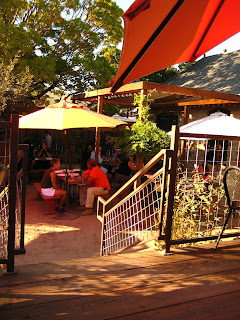 Decked Out in Style
Beyond our spot on the outdoor deck, patrons representing a variety of Bay Area demographics filled out the beer garden and seemed to be having a nice old time. 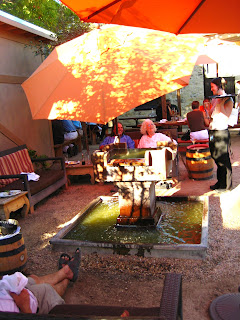 The beer garden is spacious and comfortable -- it's a really nice outdoor environment, with plenty of picnic tables, all-weather couches, and shade-brellas. 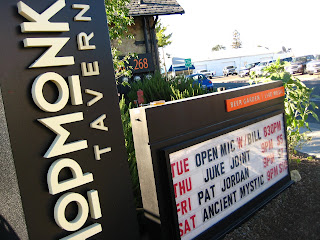 Music, Man
With a 200-cap venue on the side, the Tavern is being positioned as a new live music destination in Sonoma. 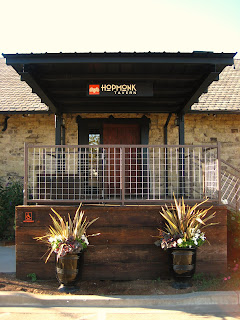 I doubt you'll catch scenester acts like The Teenagers or Santogold doing shows at Hopmonk, but I'll bet that next time I'm passing through Sebastopol en route to or from some kind of vacation paradise moment, I'll find some sweet Bay Area roots rock band, afro-beat dance party, or live reggae extravaganza going on.


Or perhaps I'll find something like this little jewel: Jefferson Starship live acoustic for two shows at Hopmonk Tavern, October 10 and 11, 2008.

Are you kidding me? Classic rock acoustic reunion shows at far-flung taverns are AWESOME. Same kind of awesome as yacht rock hero tours, like the upcoming Bay Area dates with Michael McDonald and Kenny Loggins (who are touring separately, I'm sad to report).

p.s. This is a sweet new Sunday treat from the City of SF, which will close the Embarcadero to street traffic from Bayview to Chinatown on 8/31 and 9/14:

The City and County of San Francisco is excited to invite you to Sunday Streets, a unique and exciting set of events happening in San Francisco over the next month.
On Sunday, August 31 and again on Sunday, September 14, a four and half mile route stretching from Bayview to Chinatown along the Embarcadero will be open to physical activity. From 9AM to 1PM on these Sundays, this route will be closed to traffic and allow for biking, walking, jogging and physical activity of all kinds. This type of Sunday morning activity has flourished in major cities throughout the world, from Tokyo to Kiev, Ukraine.

It's free and open to all. Travel the route and explore free activities along the way. Explore new neighborhoods. Exercise and have fun. Try your hand at yoga or dance. Bring your kids for special children's activities. Run the bases at AT&T Park. Come make history and expore San Francisco in a whole new way.

You can learn more about Sunday Streets and its many activities by visiting www.sundaystreetssf.com.