A girlfriend just emailed me:

Darling, where should I go for a romantic date in SF where I won't have to spend a lot or have reservations. things on hills a plus.

How stoked was I to have an instant answer for her?

SF's new sleeper hit, Baraka, lounges sluttily on the corner of 18th and 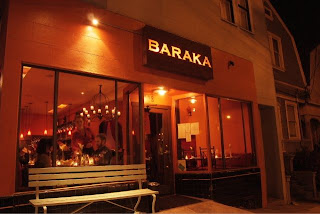 New Owner, Fabu New Food
Formerly a Moroccan tapas place within the Chez Papa/Oola/Chez Maman mini-empire, Baraka has a new owner, Michelle Hughes, as of May 2008. Hughes retained key staff, meaning that this little hilltop, corner restaurant (across from Aperto (yum), Goat Hill Pizza (all you can eat Mondays!), and Lingba Lounge (zzzzz?) is powered by people who understand neighborhood hospitality -- and they just so happen to serve fabulously fancy, downtown-caliber food.

I had dinner there the other night with my linen designer friend Gina, who like me, worked for a spell at the well-regarded 42 Degrees -- before esteemed chef/owner Jimmy Moffatt closed up shop and took off for Hawaii to open a tapas bar and (ostensibly) surf his balls off for the rest of his days.

We agreed happily that Baraka's dishes reminded us of the menu at 42 Degrees, and not just because of the roasted bone marrow ($10).


The Chef
The chef, Chad Newton (a onetime sous chef at Postrio and opening staff member at Redd in Yountville), is a really nice guy who's obviously excited about food. 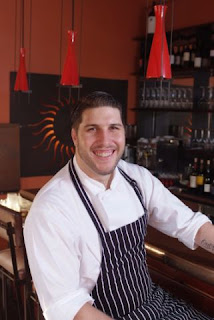 See? You can tell from that genuine smile that he's nice. And excited about food.

He drives down to Blue House Farm in Pescadero twice a week to geek out on their produce and bring back seasonal ingredients, as well as unusual little garnishes like bachelor blossoms and arugula flowers.

The Food
The erudite Postrio take on seasonal goods is evident in Newton's dishes, which favor elaborate, classical preparations (torchon of foie gras as an amuse, for example, or rich pork rillette in a buttery puff pastry shell with a pork loin entree -- $26) alongside simple, seasonal bits (like halibut with a simple cherry tomato and bread salad, kicked up with romesco, basil, and fennel puree -- $24).

This isn't molecular gastronomy, but it is high-class cooking; it won't be long before this restaurant has a highly devoted local following and some national press to boot.

The Money
Two of us had a full three-course dinner with wine, and the bill rang up at less than $150. The price point for this level of dining is lower than what you'd find at buzz restaurants like Farina or Anchor and Hope, and it's only a touch higher than that of a standard neighborhood spot.

Dinner felt extravagant and fabulous, but in the mellowest way. Didn't feel weighed down afterward, either. Got to love a light touch in the kitchen!

By Restaurant People, For Restaurant People
The service is excellent; mellow, knowledgeable, pleasant, and very accommodating. After my friend asked for a headache pill, we discovered that the Maître d' had left the restaurant to run up the street a couple of blocks to get some. That is so Doug Washington; I love it.

Industry vets are in charge, and in fact, we learned that our server, who looked a bit like hot, hot Laura Prepon* from "That 70s Show," already has a day job, but works at Baraka on a lark because she likes the biz, and because she's old friends with Chef Newton from the days when they worked together at -- of course -- Postrio. 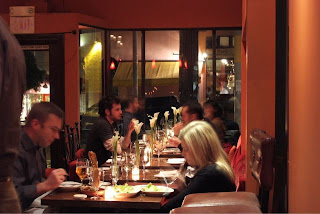 Casually Plushtastic
And it is homey: the red velvet banquettes along each wall are deep and lined with firm pillows, and many of the dining room chairs are high-backed wrought iron chairs with cushions. The glassware is classy, edgy. A window seat affords a bit of a view of downtown, and that little restaurant-laden strip of is perfect for strolling the eye-popping views before or after dinner. It's easy access* to the freeway, cabs, and buses; both the 22 and 48 buses pass by or near the intersection.

*Okay, that's a lie. Potrero Hill is a b*tch to get to. But think of it as a nice little hilltop getaway.

Check it out and let me know what you think!