The new Four Barrel Coffee opened today, and it was going off. The new spot: 375 Valencia @ 15th, in the inner Mission kitty-corner from Little Star pizza. Lots of buzz about high-end coffee these days, what with a new Blue Bottle opening a location soon in the Ferry Building, and Ritual Coffee Roasters' recent opening of an outpost in Napa's Oxbow Public Market. 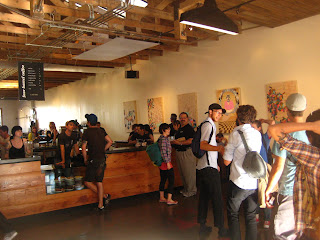 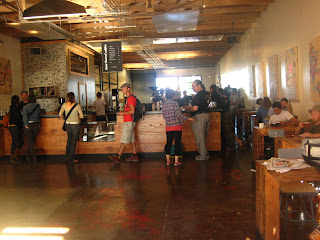 (...the friendly counter staff sheds the lines, over and over again, as patrons flow in and out of the side-wall seating area.)


Coffee: Brightener of Mornings, Ruiner of Afternoons.
I would get the afternoon caffeine slump all the time back when I worked downtown at OpenTable managing their customer support knowledge base (great company, crazy job), and I remember wishing desperately for a quiet, indoor place to take a 20-minute nap. (OpenTable had a foosball table, but no Odwalla cooler or nap room. It was dot-com lite.) 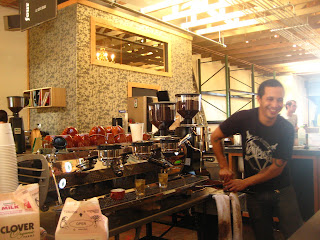 
Afternoon Coffee: Curing the Caffeine Slump
You know the caffeine slump -- the one that makes you go out and get an espresso at 3 p.m., even know you had coffee at 8 a.m. and 11 a.m. -- that one. 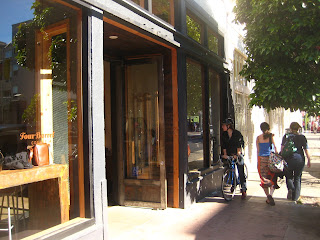 The Nappening
I got to thinking about the caffeine slump coffee the other day when writing about REBAR's participation in the upcoming Yerba Buena Center for the Arts panel on green solutions. One of my favorite REBAR pieces is the Nappening, a 2007 interactive piece installed in a public indoor space at 55 Second Street, San Francisco. 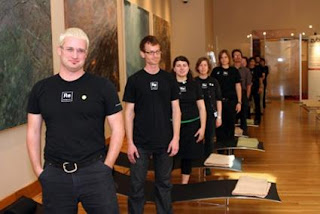 A row of lightweight, modern chaise longues, each with its own napping blanket [pictured], was made available for one day to the public, who could come in and just nap for 20 or 30 minutes behind a giant, light-diffusing scrim. People loved it! 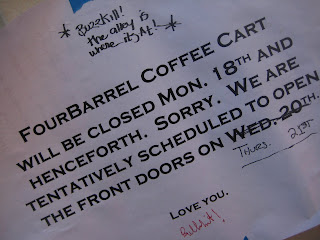 After two weeks of the occasional, mild, afternoon withdrawal headache, the result was amazing: I stopped suffering from the afternoon caffeine slump.

Better yet, once I stopped doing caffeine, I would wake up alert and fresh each morning, even if I had been on bad behavior the night before. No need for coffee! Although I became super-sensitive to caffeine. One bite of warm chocolate cake, and I'd be up til 3am.

I do highly recommend going off of caffeine; it was truly awesome. Simply taper off to green tea and decaf gradually over a few weeks, then quit the green tea, then you're done. Voila! (A marvelous coffee substitute? Inka. Sold in bulk at Rainbow. So good.) 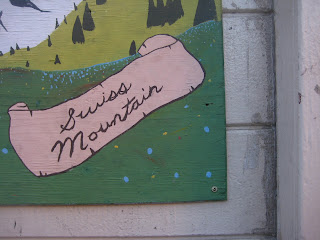 (...the sweet mini murals in the alley remain.)


Back in Black (with a splash of cream, thanks)
This summer, I started drinking coffee again. It started with a decaf coffee back in February of '07 at the French Laundry (like I'm going to say no to *anything* there), and I've slowly worked my way back toward real coffee from there.


Why? Coffee is DELICIOUS.


Medium Roast, Hot Nuts
I've been on a hunt for a solid, medium roast coffee with a toasty, nutty flavor that goes well with 1/2 and 1/2, and I'm having trouble finding it among the fancypants coffee outlets.

The Silken Splendor at Philz Coffee is the front-runner, while I've found the (pleasingly) lighter roast Brazilian fazenda coffees at Ritual to be too flat (I know, heresy), and the drip at the Linden Street Blue Bottle to be (again, heresy) lukewarm. 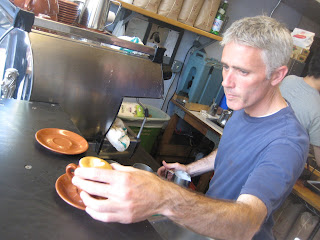 (And they're so very nice at the Linden Blue Bottle [pictured], and so very dedicated to their ways, that I daren't ask for hotter coffee.) 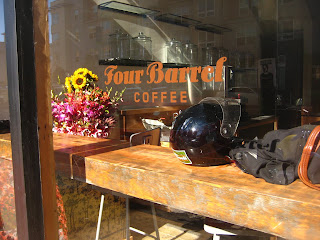 The coffee at Four Barrel, I'm happy to report, is served nice and hot. But is it my nutty, toasty, medium roast fantasia? Er, maybe not, but close? I'll go back for sure. It's pleasant there.

(Also, Four Barrel's drip coffee is like cocaine or something. I had a small cup at 4:30pm and have been not only dizzy and high but also rapidly achieving tasks for the last 5 hours, pretty much completely nonstop.)

Current soundtrack: Rock the Bells highlight Amanda Blank, for folks who want a teensy bit of Winehouse in their Spank Rock-Santogold-MIA cocktail.