Decked in a grey wool cocktail dress and fresh off of Route 66 from the East Coast, I waited on my first San Francisco table on this legendary patio in 1997. 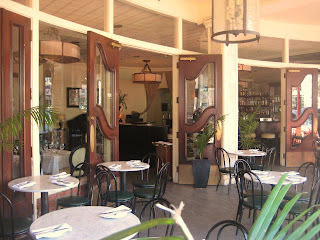 (This was shortly before learning that working a shift at Enrico's, which at the time served til 1am, required an inordinate amount of on-the-job drinking in order to keep things professional. This was much less the case later on during my sweet little tenure at 42 Degrees -- R.I.P.)

Enrico's was an amazing base from which to get acquainted with North Beach and San Francisco. The tourists were clueless and delightful, the dot com nouveau riche were getting wasted on mojitos and tipping big, the ex-pornographers and literati hippies were camping out at Ward Dunham's end of the bar (where the foodies snuck in for secret burgers and good wine), and my co-workers were partying like animals almost every night. It was magical.

Walking by yesterday, I noticed that Enrico's (under new ownership and renovated as of 2007) now has a to-go window at the former(?) pastry station, where great bakers like Noriko Washington and Mary Jo Thoreson taught me about bombes, mille-feuilles, and canneles de Bordeaux. Crazy! 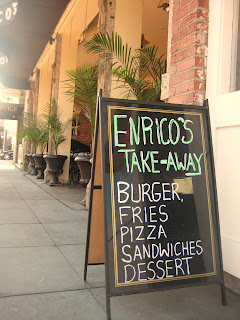 First, someone really needs to assign sandwich board lettering duty to a staff member with some handwriting skills. No offense. 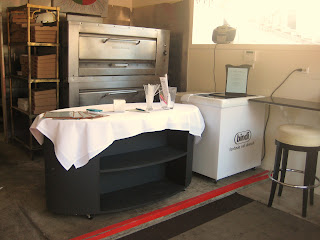 The little interior is cute enough, until you look past the white tablecloths to the mess of tanks and tubes separating the area from the kitchen. Come on y'all, invest in a partition. (Classy tip jar sign!) 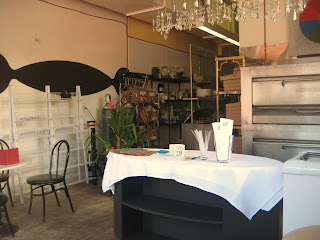 There have been more than a few changes on that stretch of Broadway; for example, the demise of the archetypal industry dive, The Crowbar, where more than once a sketchy late-night decision was made by just about everyone in the business. A sortof sweet change: Black Oak books became the Beat Museum. 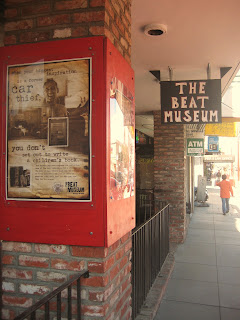 And you've got to love a bathtub full of books. 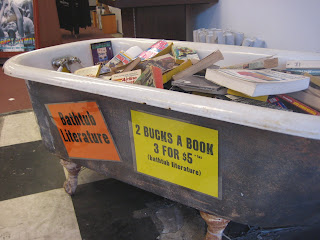 Broadway is changing, naturally, as it always does. (Those jersey barriers are for sewer work, they say, however, not for anything fab like sidewalk widening.) 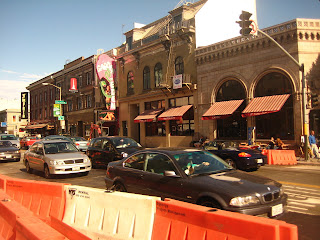 But it's not changing too much. 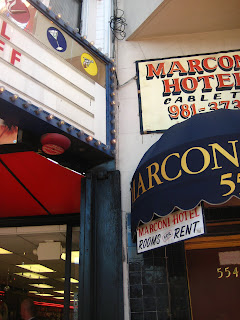 Girls with bruised thighs are still enforcing the two-drink minimum at the Hungry I Club, and the perennial creepy door dude still stands watch in front of the Roaring 20s. 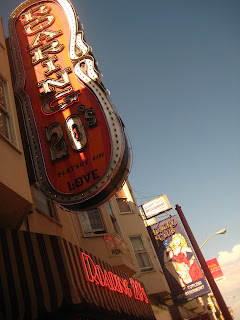 And the Garden of Eden sign is still one of the city's best... 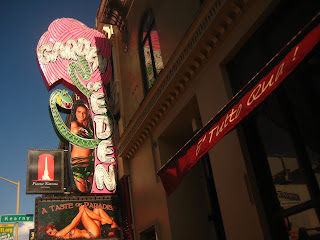 ...holding up the fort next to the likeable new E' Tutto Qua, which just might be able to overcome the curse of the Broadway/Columbus corner that has seen so many restaurants flail and fail. 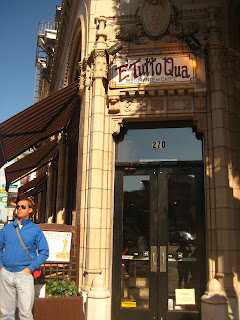 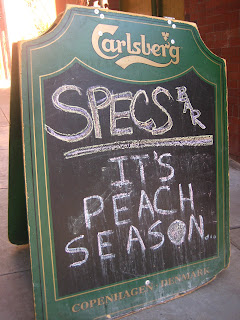 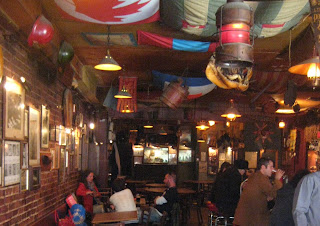 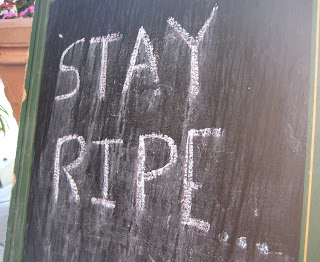 And neither does Tosca, where the opera on the jukebox is as much of a draw as the house special, brandy cappuccino, even though those little coffee drinks are never hot enough, in my opinion. 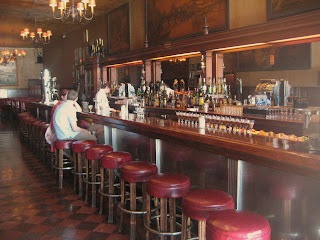 A peek into an open door on Columbus... 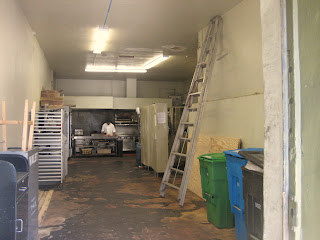 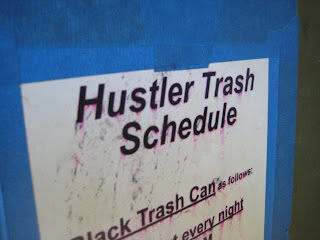 But turn a corner, and you've found one of the last bastions of artsy, inexpensive, post-collegiate eats in the city, Cafe Prague. 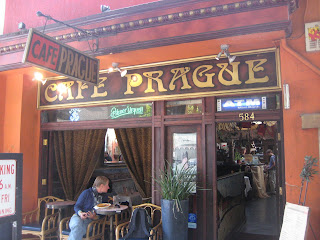 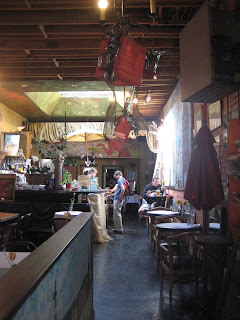 Down the way a bit, the Old Ship Saloon! The corner of Pacific and Battery was coastline before landfill socked it in; this was the resting place of the Arkansas, and apparently, it was a fairly reliable place for getting shanghaied. 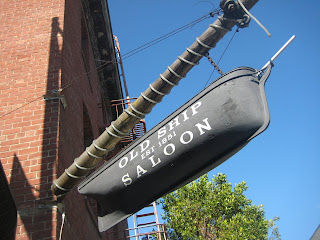 Years ago, a fellow with whom I was on a date made me cry at the Old Ship. I was most definitely being oversensitive, but he had insulted my handbag, and ladies don't take well to that sort of thing. Good thing there's tasty pizza with sopressata and egg next door. 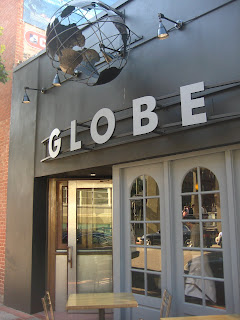 Funny thing about the fancy late-night chef cafeteria, Globe: they used to serve a mean burger. Had one at the bar once. It was spectacular. Last couple of years, the bartender looks at you like you're cuckoo when you ask if they serve burgers. One bartender went so far as to declare that they had NEVER served burgers! But I know better.

Another thing I know: this is the best giraffe promo I've ever seen.

(The hot car parked in front of it does not hurt one bit.) 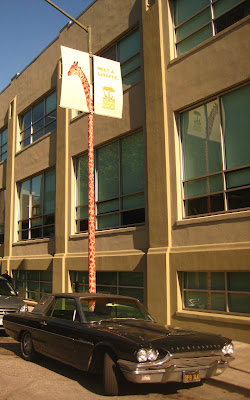 After miles of pavement, a summery square of green green grass! 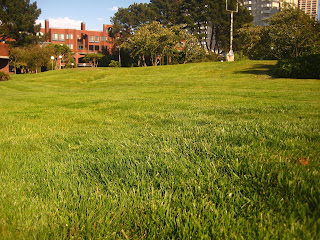 Macarthur Park is a charming spot. Working water fountain and all. 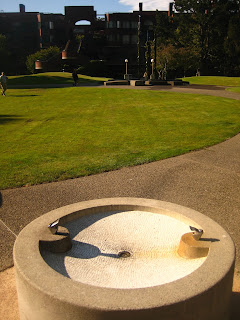 While the city can make one feel a little too hemmed in, a brief afternoon stroll can remind one that San Francisco is indeed a magical place. 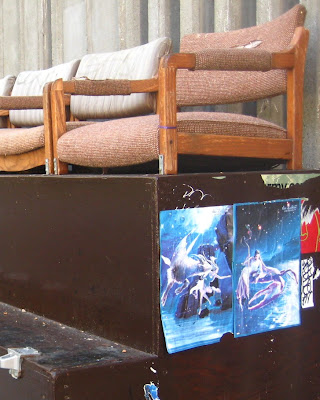