Sushi Bistro to Bring the Fish to the Mish 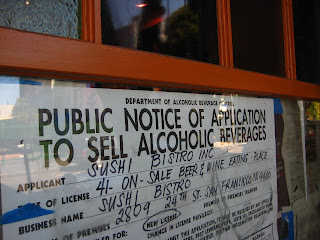 Sushi Bistro's upcoming new loc at 24th and York is coming along!

I'm pretty excited that a sushi shop is opening in my hood. 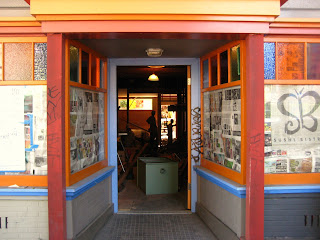 I love fish purist sushi, but I love a good gimmick, too.

(Like the Dinosaur Foot at Fuji Sushi in West Portal -- it's a Disneyland version of the legendary spicy tuna with crispy rice and jalapeno at Katsu-Ya in Studio City.)

Granted, I've never dined at Sushi Bistro's Balboa location, so this is all just wishful thinking. 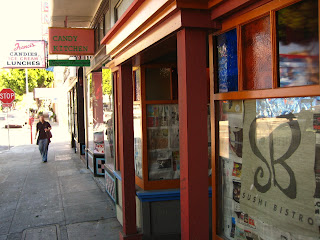 The carpenters inside said it might open in a few months, but other reports note an early 2009 opening.

So I gave owner Dave Chien a call; he says that barring any unforeseen issues, they plan to open in November of 2008.

The chef, Sheen Zhou, will run both locations, and they plan to tighten up the menu by losing some of the combination dinners.

They'll be serving beer, wine, and sake, and here is some really good news for the neighborhood (which has been welcoming so far, according to Chien): they're looking to serve until 11 p.m., and possibly later on weekends.

That block of 24th is brightening up nicely. No Pasta Pomodoro or Starbucks, just locals like the St. Francis Fountain, Sugarlump Coffee, Pop's, the Roosevelt Tamale Parlor, and Dynamo Doughnuts a block away, all just doing their thing.