I didn't think I could fall so hard for my new urban lifestyle tool, a red aluminum Sigg water bottle with hippie bullsh*t all over it -- which I resisted buying for months because I'm no hippie. But this hippie water bottle? I am into it. 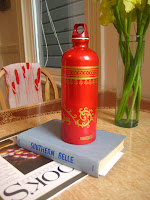 My dear high school friend and SF Station colleague Margaret has been toting a Sigg to yoga forever, however, and she's no hippie either, but I still held firm.

Then, while drafting a pro-Obama letter to my Republican uncle in Florida referencing the gnarly North Pacific Trash Gyre (to which I was alerted recently while interviewing this mindblowingly forward-thinking East Bay architect, Eugene Tsui), I started to feel like a jerkface for buying plastic bottles of water en route to my hippie yoga classes.

But the Bisphenol A/breast cancer scare took the fun out of using my post-collegiate era, plastic lexan Nalgene, so I bit. And just in the nick of time, too...

Reading Marcia Gagliardi's always-awesome Tablehopper email newsletter today (thanks for the shout-out, Marcia!), I was reminded of this crazy new Sigg water bottle shortage by her post on another notable kink in the global supply chain: the Hitachino Nest beer shortage.
(You can always count on Marcia to deliver the best food news with equal portions of wit and gaiety. I am such a gushy fan, but I am so right.)

So anyway, these Sigg bottles are so mad popular, apparently, that the factory is completely sold out, and the company's online store has been closed down until they can make more. The letter on the product page at their site explains the details, including their vow not to outsource to China.
(Which reminds me: I could care less about the Beijing Olympics. F*ck the Chinese government. Seriously.) 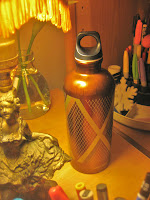 They still have the Sigg bottles at Cole Hardware (buy local!), REI, and Whole Foods, but the selection is piddling. There are other brands, but whatever. I went ahead and bought a smaller Sigg, printed in coppery brown argyle, for hiking.


Note: If you noticed that hardback book titled Southern Belle underneath my red water bottle in the top photo, it's an amazing-so-far memoir by Mary Craig Sinclair, wife of Upton Sinclair (The Jungle), which I've been reading over my new breakfast obsession, Kashi cereal flakes with cold almond milk and fresh booberries.

My friend Klover, a fellow Southerner, found it for me in the free bin outside of Abandoned Planet Books on Valencia the other night (after yoga, not surprisingly), and it is awesome. The author gaily recounts growing up as a post-Civil War debutante on a Mississippi plantation, where her family was neighbors with peeps like Jefferson Davis. It's really something.
Email Post
Labels: books bottles gift gifts hiking outdoor outdoors products san francisco shopping tools yoga