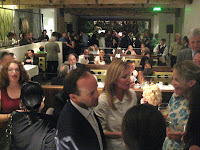 Although partygoers had to jostle to reach passing trays of raw oysters and spooned roasted salmon, and the champers glasses were filled with Gruet from New Mexico (the discerning drinker's value bubbly), it was obvious that Urban Tavern's owners were intent on making a splash with their party: 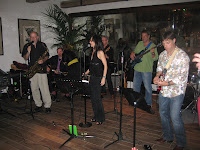 The last time we saw the Back Burner Blues Band at an opening, Pat Kuleto had hired them for his over-the-top extravaganza opening of EPIC Roasthouse and Waterbar. 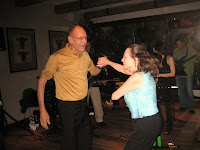 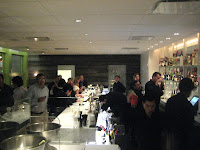 The marble-topped bar, with its saddle-shaped seats, was slammed all night. Notable fact: GM Pierre Johansson's wine list will focus on old world styles that are organic, biodynamic or sustainably farmed. 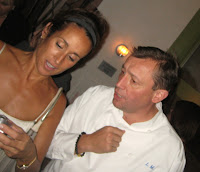 Omelets will be served all day, and roasted meats will be carved tableside. I love friendly, professional hotties who can get the work done, rock the styles, and pop the cocktails (and the fancy spoonfuls of calamari) with a smile.

Of course, no downtown party is complete without an appearance from the one and only Harry Denton, master of the Starlight Room. This guy is Mr. San Francisco! 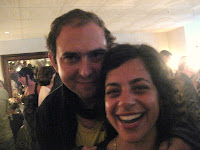 My friends Chrissy, Jennifer and I were pleased to be spontaneously friended by KALX and NPR radio host Tania Ketenjian and her husband, Philip Wood.

Just look at 'em! Those are some nice peeps. 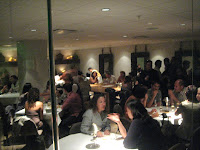 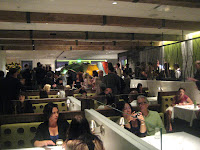 Back in the main dining room, designed by Donna Scala and the Gensler firm, attendees were maxxing and relaxxing amid reclaimed wood beams, plenty of booths, and a communal table (made from a salvaged fallen tree) up by the bar. Nothing new or avant garde in the design, but it's tasteful and modern with a hint of the rural. 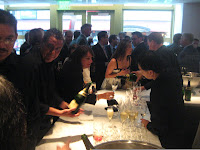 San Francisco fine dining followers will certainly give Urban Tavern a whirl, but will the iffy-in-the-past location at O'Farrell and Mason encourage repeat business and success on the scale of a place like Salt House? 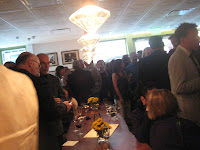 Urban Tavern should certainly draw capital as a chic new watering hole for the traveling expense account set. After all, despite a standalone, sidewalk-facing entrance on O'Farrell, it is nevertheless located on the ground floor of the Hilton. 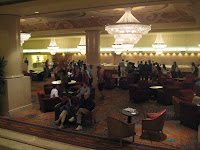 The lobby of which, down the block, was booming in its own special way on Wednesday night -- we could hear the milling crowd noise from the hotel foyer all the way out on the sidewalk as we walked away from the opening party. I took a peek. Who knew the Hilton lobby was such a scene?

Must be that rip-roaring Euro.