I get funny looks sometimes when I order my favorite summer cocktail (which, happily, is my favorite winter cocktail as well, ever since "Negroni Christmas" 2007):

Campari, Absolut Mandrin, and tonic over ice with an orange slice.

"Nope, tonic. It sounds crazy, but actually, it's CRAZY DELICIOUS!"

Like an 80s movie yacht club sunset at the end of summer (preferably starring Raquel Welch and Ryan O'Neal), it's bitter and sweet and light and lovely, and it's devastatingly delicious. The vodka brand doesn't matter, and Ruby Red grapefruit vodka works too. Just go halvsies with each booze and top 'er with tonic. I know a handful of folks who think this drink is (devastatingly) disgusting, and I like drinking with them very much, because it means more for me. 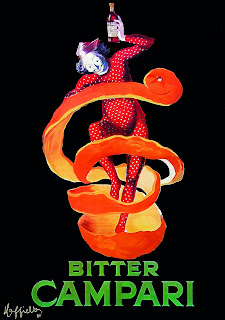 Campari Party and Urban Greening Panel
If there's one bar where my goofy drink order is going to fly, it's this Campari-sponsored open bar at YBCA's exciting-looking panel discussion on avant garde, urban greening solutions on Wednesday, August 27, two days before Slow Food Nation sweeps into the city for Labor Day weekend. Drinks served pre-and post-discussion. RSVPs are accepted via phone only; call 415.373.0185.

The more I think about the lineup of this panel discussion, the more stoked I become. Check this out!

Limited seating. Please RSVP to 415.373.0185
RSVP by invitation only and required [consider yourself invited, o reader of the Yum Diary!]. You must be over the age of 21 to attend.

Join us as three individuals based in the Bay Area talk about their initiatives for sustainable urban living.

-John Bela, architect, designer, and member of the artist collective Rebar, is the designer of the City Hall Victory Gardens, a collaborative project currently on view in the public sphere.

-Shruti Narayan of the design firm Arup is the project manager on the sustainable design strategies for the new building of the California Academy of Sciences.

-Jerome Waag, a performance artist and chef at Chez Panisse restaurant, explores the urban environment as a site for the production of food in his latest project OPEN City at New Langton Arts. 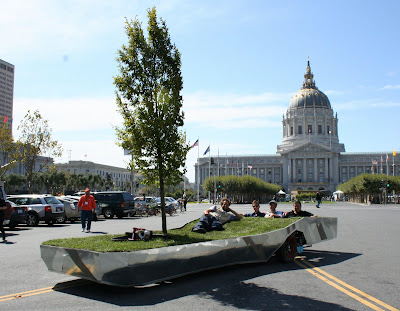 Park It
I've been a fan of REBAR's kicky, socially conscious installation art for years, ever since I heard about PARK(ing) day, an SF-based, global one-day conceptual art event "where artists, activists, and citizens collaborate to temporarily transform parking spots into PARK(ing) spaces: temporary public parks."

And I'm excited to see Berin up there on stage; she was once the Managing Editor at SF Station!

Plus, these OPEN dinners at my favorite SF gallery, New Langton Arts, are supposed to be the bomb.

And Then...Later: Yacht Rock Magic
After the Campari event at YBCA on 8/27, yacht rock aficionados will converge at 8pm-ish at Rickshaw Stop for a very special event: the creator of the legendary Channel 101 web show "Yacht Rock" is touring the country to screen all 11 episodes of the show, which re-enacts pivotal moments in the careers of Toto, Michael Jackson, Kenny Loggins, and Hall & Oates. KALX DJ Roscoe 2000 will be spinning all the yacht rock hits, and there'll be a band and secret guest action.


Preview the episodes here, but prepare to fall in love!

http://www.channel101.com/shows/show.php?show_id=152
(Veterans, there's a new Jan. 2008 episode on the creation of the song "Footloose" with a cameo by Jason Lee, and an enjoyable bit on cheeseburgers in paradise and Kevin Bacon sandwiches.)

"Ironically, Channel 101's most memorable show came to its end quietly and unremarkably, not unlike some of the careers it saluted with a smirk. Instead of choking on its vomit in a Paris bathtub or overdosing on a Hollywood sidewalk, Yacht Rock simply told us one last story about Steely Dan, then hoisted its sails and drifted away while a satisfied crowd waved goodbye from the docks, exactly one incredible year after its historical debut. Bye, Yacht Rock. We loved you." Channel 101

What a wonderful environment in which to enjoy one's fellows over a beverage or two; I will be there for certain.