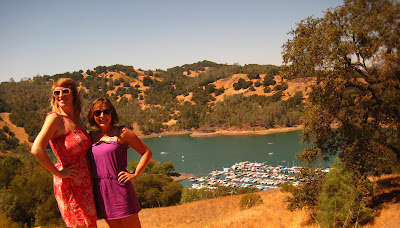 Intrepid pontooners need to eat nice. Lake Sonoma *is* in Wine Country after all. 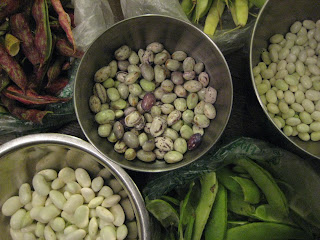 Good thing I had rounded up fresh shelling beans from the Ferry Plaza Farmer's Market in San Francisco.

L to R: Italian butter beans and cranberry beans from Iacopi Farms, and little marrow fat beans (from a farm whose name I forget! But their stall is right across from Iacopi on Saturdays.)

Dirty Girl had cranberry and cannellini beans too, btw. 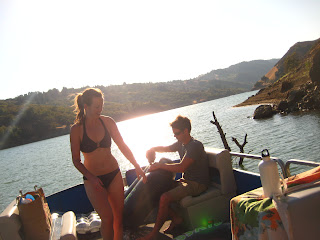 Working up an appetite in the raft inflation station. 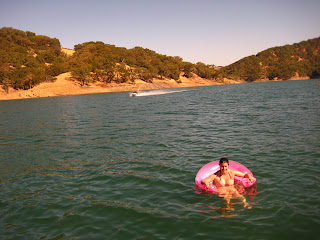 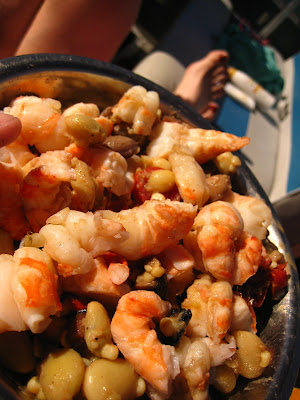 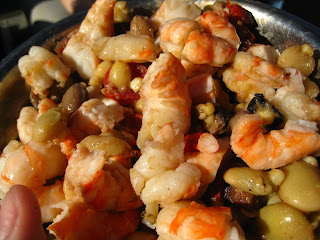 The tinier marrow fat beans won for their light loveliness, and I finally saw through my obsessive little California shelling bean quest.

(And I finally remembered to take a photo of a finished succotash.)

Now I know: you can't get Carolina butter beans here, but the heirloom shelling bean season in August and September is indeed a special time. 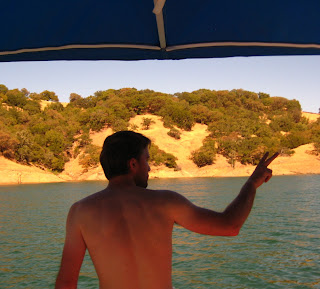 The California shelling beans are pretty starchy compared to the firmer, waxier Carolina butter beans for which I've been searching here in vain, but they're still mad delicious. 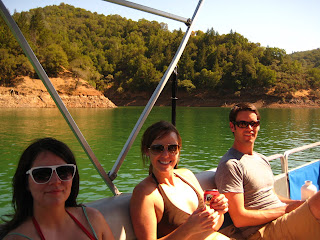 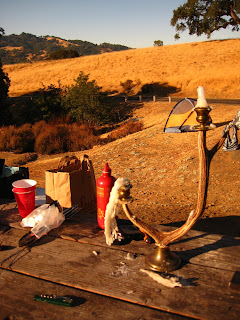 Time to camp! Liberty Glen at Lake Sonoma may not have running water, but they don't take reservations and the 100-odd campsites never fill up, not even on holidays.

Did you see this excellent post at Becks & Posh on baking bread over a campfire at 8,000ft? Fabulous. 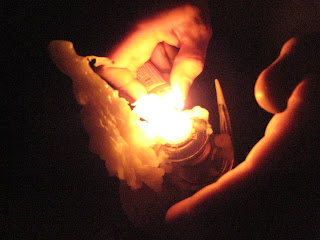 Bring those suckers to a BBQ and you're hot property, guaranteed. (At least til the package of 18 or so has been decimated.)

Then stuff some bananas with chocolate chips, wrap them in foil, roast them over the coals for 7-10 minutes, then stick a fork up in there. Oh yeah. Thanks, rad friend Chrissy Loader, for documenting our recent attempt to flambe our chocolate banana boats with Johnny Walker Black! 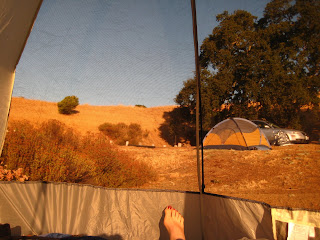 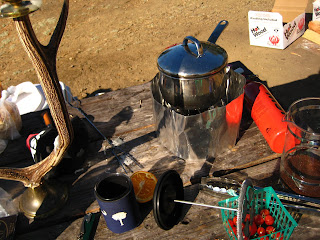 The maiden voyage of my MSR Dragonfly camp stove went beautifully! The coffee was delicious.

Hot out there though! Time to hit the Russian River. (Again.) 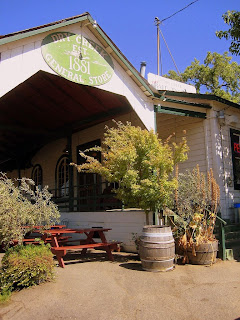 Made a stop at the Dry Creek General Store, whose legendary sandwiches do not disappoint. So good I wasn't even anywhere near thinking about taking a picture of my smoked turkey, tomato-piled, basil-y pesto delight!


But my buddy Nate Prouty happened to take a couple of snaps at the store while they were wrapping up his salami panini. 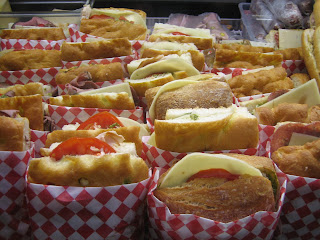 (Seriously, wow. Those sandwiches are something special.)


When rivering, it's crucial to maintain focus, and things like top-ten-of-all-time sandwiches do command a fair amount of attention. 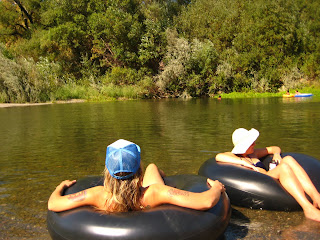 After all, devoting oneself to floating through life takes serious dedication.

For my favorite succotash, you just throw together an onion/leek/scallion situation, a teensy tidbit of garlic, a skosh of oil or butter, a little chopped pancetta or bacon (see below for vegetarian* version), and fresh butter beans or field peas (although frozen lima beans and shelled edamame will do the trick!), then saute on low til the aromatics go translucent.

Then, throw in a ham hock or a handful of chopped smoked ham, add a little sprinkle of Old Bay or whatever, a pinch of chile flakes, two shakes of Worcestershire sauce, a cup or two of beef stock (or whatever), some shrimp stock* and plenty of salt and pepper, then simmer covered til beans are tender for 15-30 min., depending on the size of the beaners.

You'll want to uncover for the last 5-10 min. to reduce the stock down so the succotash isn't soupy. Add sweet corn and cherry tomato slices at the end so they cook for just 2-3 min, throw in some grilled or poached shrimp, and you're done!

*Crucial step for maximum flavor! Either: make a quick shrimp stock out of shrimp shells and water to add to the beef stock while the beans cook, and then grill the peeled shrimp and throw them in with the sweet corn and tomatoes at the end. (Tomatoes add an important dash of acid to the mix!)

Or you can just poach unpeeled shrimp in the beef stock while the beans cook, then pull them, shock them in an ice bath, peel them, and re-introduce to the finished pot.

Either way, if you make sure to extract all the yummy shrimp flavor from the shrimp shells (cause that's where it's at), your succotash is going to be shrimp-tastic!

I love a good shrimp.

Omit the pork, shrimp, and shellfish stock. To make up for flavor lost in the omission of smoky meats and shrimpy treats, throw some Old Bay seasoning into the field peas/butter beans, aromatics, and corn kernels while they're cooking, then reserve all to a big salad bowl, into which you will add a saucy, light dressing heavy on tomato gel, black pepper and white vinegar:

Add to the big bowl with the tomato flesh, which you have chopped or diced. Throw in a finely diced celery stalk and a pinch of chopped Italian parsley. Mix em up. I like to shred some basil into the finished product as well!!