Is the Burgermeister chain swooping into the former Yum Yum House space at 581 Valencia in San Francisco's Mission District?

Although late last night (see below) I reported that this might be the case, I emailed their head office this a.m. to confirm the rumor. I just got off the phone with Isaac Mogannum, the meister of Burgermeister, who was mystified.

"We're looking outside the city, but we have absolutely no plans to open a location in the Mission," he said, adding, "It's funny, someone just the other day told me there was a rumor going around that I was opening a location at 21st of Valencia. I do walk around the Mission a fair amount in my Burgermeister sweatshirt," he quipped. "Maybe people are just confused?" 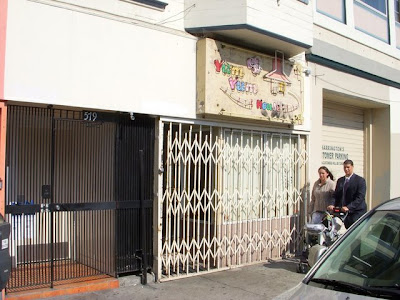 Farewell to the Meatless General
Eater SF had reported Yum Yum House as shuttered back in May 2008, and then they broke a bit from the Business Times' New Fictitious Names Registered section, which noted that an entity called "Burger Bar" had filed at the address.

Twinklings that it was Hubert Keller's vaunted Burger Bar were quickly dispelled within the same day's posts.

Since then, there's been little twitter on the Yum Yum front, except that perhaps they'd joined forces in some way with Big Lantern on 16th. Frankly, I'd forgotten about the whole thing. Until today!

Being "Hardcore" Pays Off
This morning I was taking a run/walk (run a block, walk a block -- it's what non-runners do when they want to try and be "hardcore" and do "interval training" and "feel boss"). I turned down Valencia between 17th and 16th and happened to switch from a run to a walk right in front of the former Yum Yum House.

Having been a fan of their meatless General Tso's chicken, I stopped to pay my respects. I peered into the door-sized opening in the plywood front, feeling a twinge of photographer's regret at having left the camera at home. (But whatever, who goes hardcore run/walking with a camera in their fanny pack?)

There were a couple of workmen in the very rear of the space, which was totally gutted and only had a strip of subfloor down.

"What's going to move in here?" I shouted. (They were really pretty far back there.)

"The Burger Mister!" the elder fellow shouted back.

"Yes, the Burger Mister!" he asserted.

"Oh, you mean Burgermeister?" I asked.

Seem(ed) Plausible to This Burger Mistress
Burgermeister just opened a new branch in Alameda in July 2008 to add to its Cole Valley/Castro/North Beach/Daly City mini-empire, so/but it wouldn't be out of the question for them to open one in the Mish this winter. (But they're not...)

Anyone have any deets on what really *is* going in at 581 Valencia? Let's hear 'em.