No need to drive drunk all over cop-riddled Napa County to entertain your guests, winos. Now that chi-chi Press Club has opened at last on Yerba Buena Lane, you can take your out-of-towners downtown for a taste of Norcal grape juice and still make it home without a DUI. 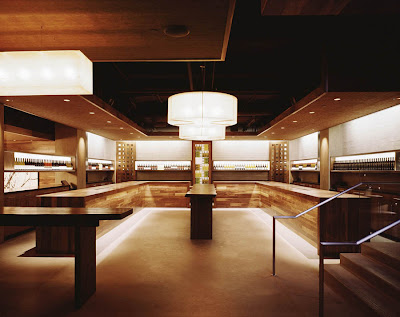 Serving as the exclusive city-side tasting room for a select group of 8 Northern California wineries, San Francisco's Press Club is the brainchild of founders Andrew Chun and Jan Wiginton, who carefully curated their "Top 8" to include a range of prices and approaches.

Two U-shaped, walnut-paneled tasting counters will be staffed by reps from each member winery: Miner, Saintsbury, Landmark, Fritz, Hanna, Chateau Montelena, and even tony Mount Eden and Pahlmeyer, which are both cher enough that neither winery even *has* a public tasting room at its wine country address.

Both Chun and Wiginton hail from business/finance backgrounds and spent three years building the concept, pitching wineries, and working with designers before opening the doors last Thursday, Sept. 10, 2008. They're plainly thrilled to have pushed the enterprise through an unprecedented number of permitting hurdles, which prevented them from hitting their expected April 2008 opening.

"It's one thing to get a permit for one tasting room, but no one's ever asked to get permits for a wine shop, wine bar, and restaurant representing eight distinct wineries under one roof," notes Wiginton. "It just took much longer for people to wrap their heads around it and sign off on the paperwork." 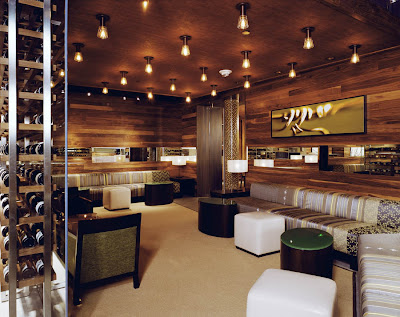 Six couch zones, a VIP area, a private room, and a dark grey poured concrete bar will serve as social zones for patrons to nosh on (fairly predictable) Cali-cuisine "food pairings" like bites of bluefin tuna tartare and pork loin skewers, while service standards will attempt to match those of the neighboring Four Seasons Hotel, which shares its hulking metal and glass facade with Press Club. 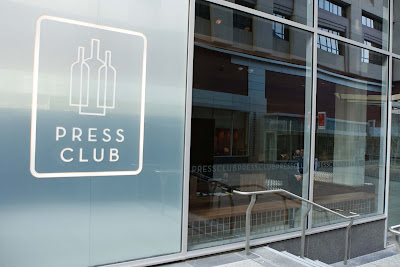 Frankly, I'll probably stick with more rough-and-tumble wine bars like Terroir, even though I love me some Saintsbury (and their fa-ha-habulous -- and very French -- winemaker Jerome Chery).

Still, it's nice to have another swanky spot in town to break out the high heels and go chic.

The best part? You can get there and back via BMW*.


O how I adore the BMW gag. It was the go-to joke of late 90s SF public access TV star Winifred Elam, a self-described comedienne and host of a legendary little public access show, Inspirational Moments with Winifred. I once attended a taping with my bon vivant editor friend Mike, who would spend Saturday afternoons burning spliffs and calling in to the Winifred show, eventually befriending her and getting invited to appear as a guest. I love thinking about Winifred joking onstage about how one day she was going to find her a man of means and move to Negril, Jamaica, but til then she'd just get around town with her own BMW.