Prana's had trouble squeezing into the foodie pantheon here in San Francisco, despite its parent, Zen Compound/Temple Nightclub, being a model for green business practices. What gives? 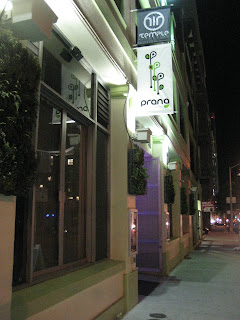 Identity Crisis
Having gone to an opening dinner last year and a couple of promo parties, and after going to dinner there tonight (which was tasty, btw) -- if I had to put my finger on it -- I think the issue is that it's got too much of an "oonce oonce" nightclub vibe for serious diners to get on the bus, even though James Jardine's 90% organic menu is actually fairly good, if a tad overwrought.

A Noteworthy Beverage
And the cocktails are great -- specifically one called 'The Devil Made Me Do It," made with pomegranate tequila and Damiana liqueur. (Interesting -- damiana is one of those hippie herbs, like coltsfoot, that can be substituted for tobacco; that's the only context in which I'd known of it.)

We literally never made it to 65% organic/biodynamic wine list, that drink was such a repeater. I almost wish I had another one right here!

Notable: There's *one* circular booth set right in front of a flickering gas fireplace, on the edge of the dining room -- a great secret spot to swing by for a romantical cocktail moment. 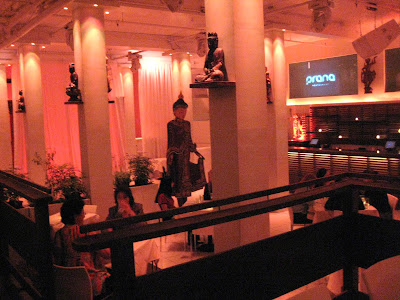 Off the Radar -- So Far
Certainly, the nightclub/restaurant thing has a place here in San Francisco. However, if you're too grown up for the club kids, and too club kiddy for the grown-ups, then you're stuck in limbo.

As far as I know, Paul Reidinger from the Guardian is the only member of the local press to review Prana in earnest in the SOMA restaurant's first year of business. (Correct me please if I'm wrong!) While offering praise for the menu, he noted a bit of overproduction and misplaced sweetness in some of the dishes, and I wholeheartedly agree.

A Mixed, Albeit Tasty, Bag
However, I will say that the spicy tuna-avocado tartare with tobiko and plantain chips ($14) is exemplary if unsurprising, and a too-sweetly sauced salmon entree is utterly redeemed by its sides of moist, glorious cactus fried rice and perfectly edgy broccolini. 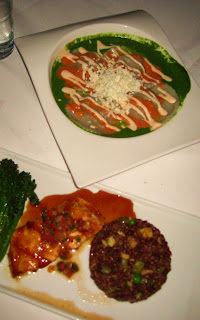 A plate of saag paneer ravioli ($15) may be gummy on the pasta front, drowning in spiced Bloomsdale spinach puree and over-drizzled with aioli, but the flavors are actually fabulous, the spinach puree is silky, and the ballooning pouches of vegetarian ravioli filling are, in fact, addictively savory.

Throw in some ideally crispy-outside/soft-inside Pecorino-wasabi fries ($6), and it's good times.

Outside Lands
It's an odd space, though, on an odd block near a freeway overpass, hutched diagonally across the street from Kate O'Briens on Howard near First. The building housed alleged Asian mobster Dr. Winkie's Mercury Lounge during the dot-com boom (the Productopia.com holiday party held there had a shot luge and everything!), and before that, it was the legendary SF club DV8.

I don't foresee Prana hurting too much, although after a year in business, on a Wednesday at 8pm the restaurant was maybe 1/3 full (of exclusively female diners) while Anchor & Hope -- around the block in an alley -- was still bumping (sans generic-sounding house/trance music) at 10pm.


Bring On the Night(club)
But Prana hosted an Oracle buyout the night before, and between Zen Compound's Temple nightclub (which absorbs Prana come party time), the new-ish Temple record label, and other ventures including a laudable green consulting foray that's led clubs like Mezzanine to copycat Temple's compostable drinkware practices, the company should do fine.

This city seems to have a limitless supply of baggy-panted chaps and short-skirted dames willing to pay hundreds of bones for VIP bottle service, and those folks should have somewhere to indulge their glam city fantasies, no?

If there's fryer oil recycling, a vertical garden, and an energy-generating piezoelectric dance floor involved, then all the better.