Here's a little stunner for your kitchen repertoire, friends! 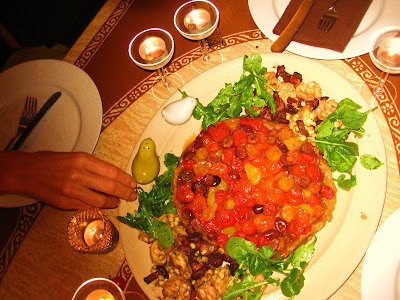 It's last week's New York Times recipe for a savory tomato tarte tatin by Melissa Clark, who does an excellent job (in the recipe's companion article) of explaining how to avoid sogging your tart with tomato liquid.

It being tomato season, and puff pastry being one of my pet ingredients for autumn treats, I gave it a shot and made it on Friday for a couple of my lovely girlfriends. (They brought the Arista Gewurztraminer and the Humboldt Fog to start. Delish!)


Tarte tatin is typically a fantastically buttery, sweet, upside-down tart made with large chunks of apple, but this fairly easy version -- with its extracted, near-candied cherry tomatoes, salty kalamata olives, caramelized onions and buttery puff pastry -- is a vegetarian main course to be reckoned with.

"The second time around I raised the oven temperature to encourage evaporation and cut more steam vents in the pastry. I also used fleshier cherry and grape tomatoes rather than full-size ones, because that’s what I had and because I hoped their smaller size would help them cook more completely.

Thirty minutes later I had my answer. Flipped over onto a serving dish, the tart was a stunning mosaic of red, orange and yellow orbs so shiny and candied that the tart really did look like dessert."

5 notes from my kitchen:


Because there's more to tomatoes than burrata and basil.

BONUS PICS OF THE WEEK:

PARK(ing) Day was Friday! This was the scene on Valencia in front of that arch. firm next to Shoe Biz: 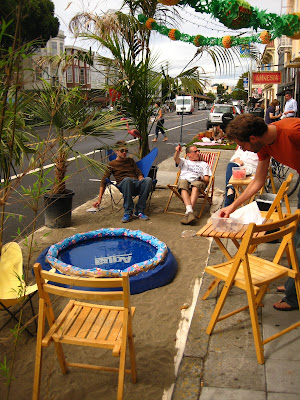 And in front of the wonderful Curiosity Shoppe, where the donut holes were poppin'! 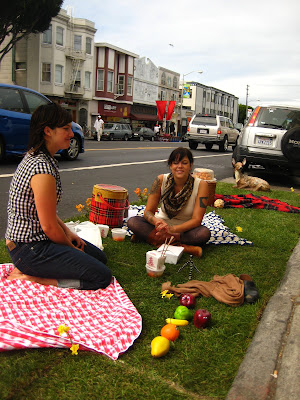