Prohibition-era tunnels used to run five blocks out (in various directions) from underneath Taverna Aventine, the new Vintage 415 spot that opened for drinks this past Thursday and will start serving food tomorrow.

Co-owner Gian-Paolo Veronese, grandson of former SF Mayor Joseph Alioto, used to tool around in them, in fact. 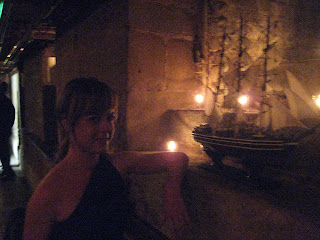 Shored up along an original seawall from the mid-1800s when Hotaling Alley was waterfront, Taverna Aventine builds further on the exclusive, historic cocktail culture that seems ubiquitous now (but was, for a time, limited to hotel bars and Historic District/North Beach neighbors like Bix and Enrico's).

Designer Lauren Geremia (grainily, darkly pictured, right, leaning against the 150 year-old wharf retaining wall next to a local antique store find) used the building's original timbers for both the upstairs and downstairs bar tops, and integrated the building's existing pipe network and masonry to further the maritime theme.

She left many of the holes and former ship-serving coal chute cutouts in the retaining wall, which runs the length of the downstairs Parlor -- where custom-upholstered, quilted leather chairs and antique sofas beckon and an ornate set of private booze/cigar/wine lockers dominates the entryway.

Here, Aventine Club members and their guests can enjoy a private happy hour daily from 3-7pm, as well as bottle service at night. Fancypants! (But casual.) 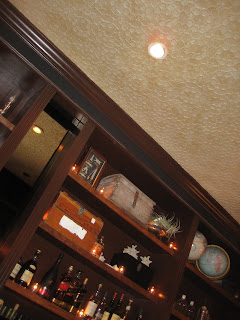 The ceiling in the main bar is made of this fascinating, expensive material called Lincrusta, which is basically just linseed oil and wood pulp cast into something of an embossed wallpaper. After two years, it settles in and becomes an immutable architectural element.

It's truly lovely and reflective of period (like much of her 60% recycled decor), perhaps even worth braving the inevitable weekend cavalcade of yahoos in luxury denim who will no doubt flock to Aventine for its exclusive members-only booze locker program (similar to Nihon's whiskey bottle club), swank-but-intimate feel, and bar nosh like local sausages, shellfish platters, salads, and piedini. 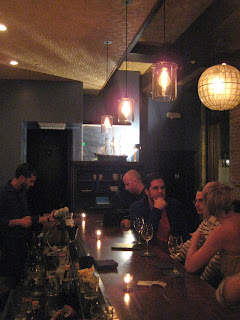 Just across the alley from Chiaroscuro restaurant and next door to the new Acqua di Roma day spa (another Veronese project), Aventine is poised to do well, as its exclusivity appeals to Fi-Di types while its adherence to SF cocktail-cultural mores will attract foodies and see-and-be-seeners. 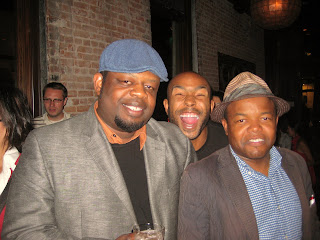 Already, old school North Beach shakers like SF Wine Week co-founders Elie Ernest and Ruben Morency (left and right) are pulling up to the bar at Aventine, so signs point to "Yes" for this new speakeasy-esque lounge.

But we shall see! (and in the meantime be seen.)