Finally, a tea room I can get down with! 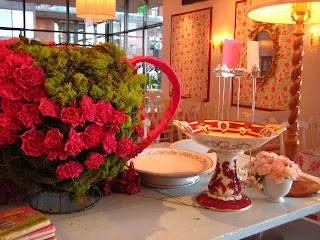 Now that Crown & Crumpet has opened in Ghirardelli Square (I swear I have spent more time at the Square in the last month than I have in the last year!), there's a spot that combines Cute, View, Space, and Food: exactly the combo you want for a sunny day out with the ladies. 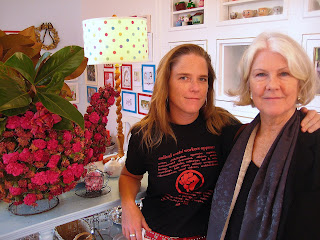 Yesterday, my friend Kate, a Brit by birth, was sworn in as a U.S. citizen. Her mum, a sworn-in British-American herself, flew out from New York. What better occasion to have a ladies' lunch at Crown & Crumpet? 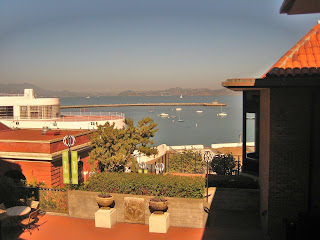 The view is decidedly not bad. 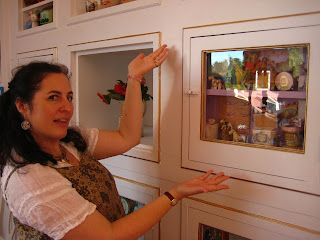 The owners are lovely. Look at that adorable Amy Dean (a former Creative Director at Ralph Lauren UK), showing off a shadowbox diorama thinger done by a local artist, one of the room's zillion cute details.

She and her husband Christopher know a thing or two about cute and original. They used to own that well-appointed little Russian Hill toile-and-soap boutique called La Place du Soleil. I liked these two back in 2000 when I wrote about them for Splendora, and I like them now in their sweet new digs! 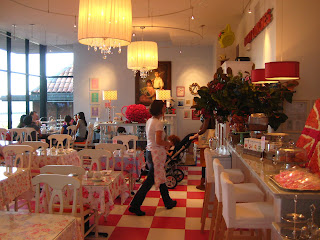 I love the pink and white checkerboard floors and all of the over-the-top decor. I also love what Eater SF had to say about it:

"On one hand, it's a traditional tea salon with tea sandwiches and giant pink things everywhere; on the other hand, the place looks like a ten-year-old girl unleashed her dollhouse-loving id on a restaurant design." 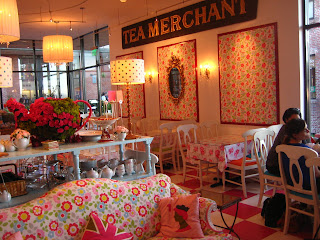 Case in point, the overabundance of custom-cut Cath Kidston prints, which grace the walls, chairs, tables, and "Trolley Dolley" aprons.

But somehow it doesn't make me want to hurl. On the contrary! Can't explain it. I think it's just that the Deans are that good. 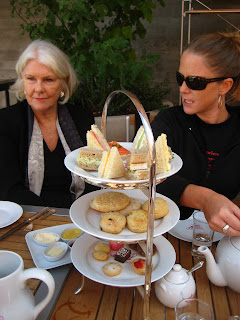 We sat on the terrace and enjoyed the view, as well as pots of tea and stacks of tasty treats like finger sandwiches, scones, and organic crumpets, the only ones in the U.S. (baked in San Rafael). 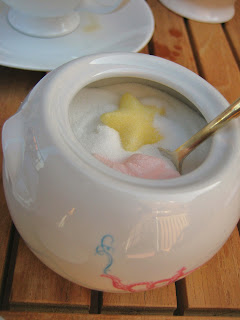 Talk about details! Little sugar stars in the sugarbowl? I love. 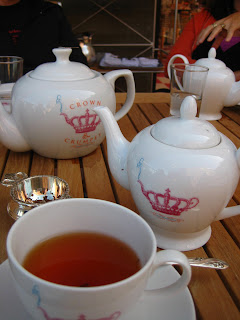 And the branded china is superb; each small teapot is served with an ingenious little silver tea strainer, and the big pots have nifty pull chains out of the lids so that your tea doesn't get too strong.

True, the biggish holes in those silver strainers aren't ideal for teensy-leaf teas like the Piccolo rooibos I had, but I don't mind a little flake in my tea, especially when I've got hot crumpets coming. 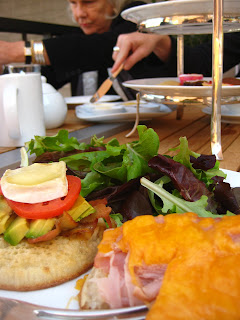 The menu item that looked the most exciting? Two toasted crumpets topped with savories ($12ish) like ham, cheddar, and mustard; tuna, sundried tomato and cheddar; bacon, avocado, brie and tomato; or Welsh rarebit with tomato (which they were out of, sadly).

Kate's cousin and I did some sharesies so we could try a couple of different takes. I wasn't blown away by the crumpet construction (too tumbly), and the flavors didn't knock my socks off, but Crown & Crumpet only just opened two weeks ago and they seem to have the right idea.

Just get the toasted crumpets and melty cheeses out to the table while they're still piping, and that should accomplish half the battle! 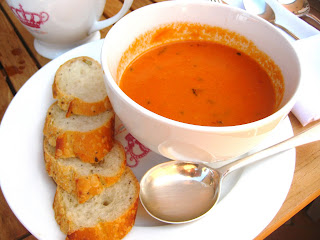 Meanwhile, their tomato and basil soup was absolutely to die for. I believe that, like a good Caesar, burger, or steak, an expertly prepared soup is indicative of a good kitchen.

Perfectly hot and creamy, and shot through with bright tomato flavor, this soup. And the soup spoons are FABULOUS. Bravo!


I'd like another bowl right now, to tell you the truth.

But tomorrow's another day.