We'll both try on this amazing recipe that I'm about to drop on you, sometime before the end of Thanksgiving weekend (6 autumn weeks! plenty of time!), and then: send me a line and let me know how it went! I will report my findings as well. Photos? Love em. Bring it on.

(Bring it on even if it's 2012 and you found this blog post when you were searching for "secret stuffed meat" on Google.)


I Don't Even Like Bellpeppers, Especially Not Stuffed Bellpeppers, But This Recipe Sounds So Incredible I'm Going to GO FOR IT ANYWAY
This beaut of a recipe was told to me today by a friend of Turkish-American origin who seems to know his way around a kitchen; apparently he used to make this with all-organic-everything for his rather demanding-sounding guru (as part some sort of trade-off gig? cooking for enlightenment?)

He gave me all the special little notes you need to get it right, which I've included, although he admitted that there are no specific measurements...it's one of those made-up recipes that ended up turning out phenomenal, so just eyeball it!
In the spirit of preserving the oral tradition, and because this recipe sounds easy enough yet mind-blowing, I'm writing this sucker up. Let's DO this thing.


Wha???
OK, so the dish is comprised of hand-pulverized grass-fed beef, fashioned into meatballs with egg, fresh dill, parsley, cumin, paprika and uncooked basmati rice
THEN
tucked loosely into whole, cored bellpeppers
THEN
all braised/stewed/simmered in a giant, caramelized onion-paprika-tomato-bay leaf-saffron sauce for an hour and a half until it is a thick, reduced glory of a sauce draping itself all over a potful of individual pepper-encased meatball magic.Which you can
THEN
serve over more rice. (Don't worry about double-starching; the rice in the meatballs kindof transmogrifies into a barely-there-meat-juice-host during the braise.)


The tricks: over-mushing the meatballs (yes! you should over-mush!), being liberal with the dill, browning and caramelizing the onions nicely, and reducing the braising liquid into a rich, luscious sauce. Oh, and the saffron. Yum.


Let me be quite clear before I start: I am dying to make this recipe.

*Warning: Any measurements within this recipe are total conjecture. You might want to glance at a good recipe for Hungarian chicken paprikash first (but, you know, without the chicken or the sour cream).

Paprika, And Lots of It: First, The Sauce
1. Slice and brown a few onions in a high-temperature fat (ghee, canola oil, grapeseed oil, etc.) until caramelized and roasty in a heavy-bottomed pot. A big-ish one, like what you'd use for a brisket or a coq au vin or braised short ribs. Now is a fine time to salt and pepper.

2. Throw in some good Turkish paprika, both sweet and spicy -- about what you would use to make chicken paprikash -- maybe 2-3 heaping tablespoons? Maybe more? You're making a paprika sauce so don't be shy. Get the now-spiced onions nice and hot and toasty, but not burnt.

Ingredient Note: All Paprikas Are Not Created Equal
I'm hoping a mix of sweet and hot Hungarian paprika will do, which is perhaps easier to find than Turkish paprika? 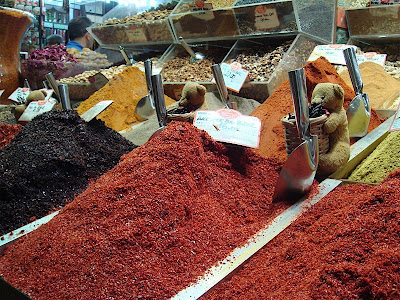 I'll try Haig's Delicacies on Clement -- haven't been there in way, way too long.

The Nov/Dec 2008 issue of Cook's Illustrated Magazine suggests mail ordering from The Spice House or Penzey's, but neither carry Turkish paprika specifically. I've had decent luck at Rainbow Grocery with sweet Hungarian paprika when I've made chicken paprikash.

Either good Turkish or Hungarian stuff will be notably better than plain old supermarket paprika.

Wherever you get it, don't front with none of this Spice Island cr*p that's likely been dead on the shelf since you made deviled eggs three summers ago. Freshness really makes a huge difference.

3. Deglaze with a splash of water (sizzzzzzzzle), and let the onions soften further.
4. Add cut up tomatoes, 14 or 15, super-ripe and unpeeled. I'm imagining mid-sized tomatoes, like big Early Girls?
5. Add a bay leaf. Bring to a boil then simmah.
6. When the tomatoes have all disintegrated, add a couple of pinches of good saffron.
7. Add enough water to braise or stew something (if something like a plateful of stuffed bellpeppers were to be added shortly?)...or perhaps even use chicken stock? Keep simmering.


I WANT YOU To Make Me a Meatball
8. Maybe while the tomatoes are crushing out up there in that pot, you're starting to make your meatballs.
9. Smush up a raw egg with a mess of grass-fed ground beef (even some organic beef is still gnarly feedlot beef, so watch out!), salt and pepper, and a significant amount of chopped fresh dill. Throw in a little bit of finely chopped parsley as well.
10. Really mush it with your hands, and go *way further* than you think you should in terms of mushing. Pulverize it with your paws, tiger, until it's soft and pulpy. Normally you're not supposed to mush ground beef too much because it can lose its tender juiciness. However, these pups are getting braised, so just stay with me here and we'll call it an experiment.
11. Mid-mush, add in a fair portion of uncooked basmati rice, chosen for its unbeatable flavor when paired with beef. It'll cook in the braise! Genius. Mush mush.
12. Now throw in a few pinches of freshly ground cumin, and some paprika. Nothing crazy, just enough to flavor it all up nice. Mush.


May The Road Rise To Meat You
13. Parse out meatballs in sizes and shapes that roughly correspond with the peppers you've chosen. Apparently, the smaller, long-ish bell peppers, in various colors, are ideal for this dish, but anything will work.
13.5. Core your peppers, as opposed to slicing off the tops. This way you can stuff the pepper cavity with meat through a hole, kindof like how dog owners stuff those bouncy rubber kong toys with peanut butter for their dogs to go apesh*t crazy over.
14. Loosely stuff a meatball situation into each cored bellpepper, filling it 2/3 to 3/4 with meat. Don't cram too much meat in the pepper, because you want to leave some room for the paprika sauce to creep up in there.
15. Pop those bad boys in the newly-watered paprika sauce that you so painstakingly prepared for the last hour. It always takes longer than they say in the cookbooks to caramelize a bunch of onions, don't you think?
16. Bring to boil then simmer on low, low heat for at least 75 minutes at the very very minimum. Apparently, the longer you let it go, the better; a 2-hour braise is the optimum.  Don't stir too much! you want the peppers to remain whole.
17. Covered or uncovered, you ask? Mostly covered but ajar. Lets enough steam out slowly so that the sauce will reduce as it cooks. The goal is a nice, thick, reduced braising liquid studded with juicy, meatball-stuffed peppers.
18.  At the last, maybe two minutes before serving, sprinkle in some fresh dill and a bit of parsley and give the pot a stir. When I make this, I will probably not be able to resist the urge to add in a pat of butter or two. JFYI.

Harold, Eat Up Your Meats
19. Delicately spoon out a few peppers per person over some delicious chickpea-studded, salted, peppered and buttered rice, and get glamorous with the sauce. Apparently, when you cut open the meatball-stuffed peppers, they ooze steaming hot paprika sauce and meat juices.
20. Pat yourself on the back for following such a loosey-goosey recipe, and enjoy!


I would surely love to hear from anyone who makes this recipe to see how it turns out. When I get a chance to make it I will do the same for sure, right here on The Yum Diary!!