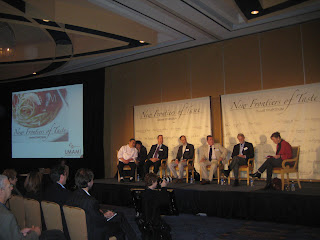 The Glamorous Life
Monday was rough: foodie hero worship, spiny lobster, Georgia shrimp, and wine at the Umami Symposium in the Hyatt Regency with serious luminaries.

Who? Oh, only legendary food writers Harold McGee and Patricia Unterman, as well as chefs Thomas Keller of the French Laundry, Hiro Sone of Ame and Terra, and Staffan Terje of Perbacco. Life is hard.


Spent the morning interviewing one of my food writer heroes, Harold McGee:

He authored On Food and Cooking, the o.g. food science bible, and writes a New York Times column ("The Curious Cook") when he's not fielding inquiries from TV producers about doing his own show. Interview to be posted within the week, but suffice to say that he speaks beautifully, enjoys David Sedaris, is loyal to his pals at Incanto and Coi, grows his own capers, and loves the Alemany Farmers Market.

Hobnob City
Shared both avid interest and a bit of eye-rolling during a not-nearly-nerdy-enough panel discussion on Umami with my food writer colleague, Amy Sherman of Cooking with Amy, who authors excellent restaurant reviews for us at SF Station. Over pre-show lump crabcakes, she introduced me to Lisa Schiffman, founder of Tuttifoodie, and I ran into Scott Hocker of San Francisco Magazine.

Lunch is Served
After the panel, the crowd of a few hundred dined on umami-rich courses prepared by the wildly talented chefs Kunio Tokuoka of Kyoto Kitcho (holy cats, this guy is good), Hiro Sone of Ame and Terra (wow), and Thomas Keller of the French Laundry (snooze -- see below).

Big Guns
I had the gigantic pleasure of dining next to The Examiner's Patty Unterman, the primogenitor of contemporary SF food coverage and owner of Hayes Street Grill. She's a pistol. She taught me all about making dashi broth and didn't hesitate to show either delight or disdain for the various parts of our meal.


Smokin' Perbacco
Also at our table: Staffan Terje, head chef at the insanely popular, Milan-chic downtown restaurant Perbacco, which has consistently been in Opentable's Top 3 most-booked restaurants since it opened. He and Unterman had a fascinating discussion about bonito, bottarga, and dashi, and I was fascinated to hear that he sometimes boils down the gelatin-rich skin of a tuna and uses it as a light thickener, when olive oil is going to be too strongly flavored. Using the whole fish -- love it.

Sonoma Secrets
Rounding out the table: Justin Wangler, exec chef up at Kendall Jackson (who's from Asheville, NC it turns out!), and pastry chef Ryan Pollnow, who noted that much of the produce for their private events and wine club dinners comes from the winery's four-acre farm and from its tomato patch further north, which produces 200 different varieties of heirloom tomatoes, if I'm recalling correctly. They're doing an heirloom tomato festival Sept. 5 + 6, so look out for that.

Laundry Loser
Keller totally phoned this one in -- his main course of lamb and fennel cooked sous vide tasted lifeless and potted, like airplane food -- a shocker considering the life-altering meal I had at the Laundry in 2007.

Funny enough, Unterman informed me that this now-trendy, 1960s boil-in-bag technique was famously co-opted by chef Joel Robuchon and scientist Bruno Goussault for the French TGV train dining program in the 70s. 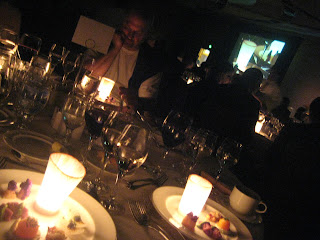 A Light Meal -- Literally
Tokuoka's 5-part starter, on the other hand, was magical, served by an army of waiters only after all of the lights in the huge ballroom had been turned off. 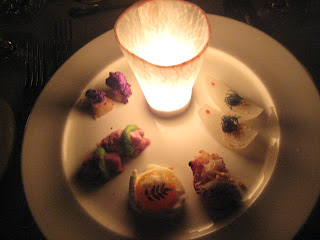 On each diner's plate, a translucent sheet of daikon radish was wrapped around a votive candle, illuminating tasty bits that brought to mind the creativity and skill you find at haute spots like Jean Georges the Laundry.

The standout? A creamy egg yolk, slow-cooked at a low 145 °F for 30 minutes (boiling point is 212 °F), then served atop smoked chicken whipped cream with a sprig of pepper leaf. Brills!

A bite of spiny lobster with dashi jelly and toasted rice was so savory and fabulous I had to draw it out by cutting it into tiny pieces.

Summer Style
I was so stoked on the food and conversation at this point that when Hiro Sone's middle course came out (under regular lighting), I completely forgot to photograph the bright, lovely plate of poached Georgia shrimp, high-season watermelon, fresh tomato, and lightly pungent dressing of anchovy-based fish sauce and cilantro oil.

Fishtastic
Indeed, fish sauce is one of the original sources of umami in cooking; Romans were using it in a form called garum 2,000 years ago. Worcestershire sauce is just fermented anchovies with bells and whistles, and as most folks know, pad thai gets its magic from fish sauce.

Humans love glutamate, which is "the most common amino acid we eat," according to Umami Symposium panelist and taste scientist Gary Beauchamp, who added, "Perhaps people have evolved to prefer it." Glutamate is the element indicative of umami, identifiable through a savoriness -- a fullness of food that increases with ripening and fermentation. Umami-rich foods range from shellfish to vine-ripened tomatoes to green tea, aged steaks and cured fish. The more umami you eat, the more you crave it.

The reigning theory is that breast milk is rich in the amino acid that indicates umami, so that babies are even more drawn to feeding than they'd be without it, thus increasing their chances for survival -- in a Darwinian sense.

McGee told a story about how he and Vogue writer Jeffrey Steingarten did an experiment: they dry-aged a number of steaks and tried them after two weeks, four weeks, six weeks, and eight weeks of aging. Normal dry aging runs about three weeks -- that's what you find in most restaurants. Once they hit the six to eight week mark, each bite of steak not only produced incredibly bold flavor, but also caused each of them to salivate uncontrollably for an extended period. Umami in action. Crazytown. 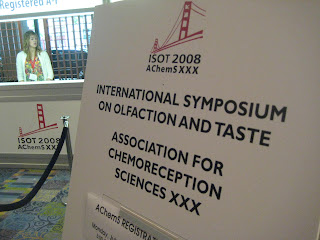 Not surprisingly, the symposium was sponsored by the Japanese Ajinomoto Corporation, which patented MSG (chemically isolated glutamate) in 1909. Never heard of Ajinomoto? It's the same thing as Accent, my friends.