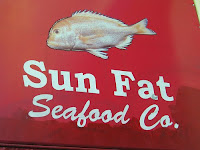 Finding Squidward
Recently, I found a huge tray of freshly caught, local Monterey baby squid at Sun Fat, my favorite value seafood market on Mission @ 23rd. Ever since my first plate of it at Delfina, I've been a sucker for grilled calamari. Time to get schooled!


Glorious Sun Fat Seafood Market
Clean and bright, it always has a few varieties of wild-caught local fish -- from huge, wild sea scallops to thick, translucent hunks of monkfish, the staff is friendly, and the prices are the lowest I've found in the city.

Sun Fat is a well-known foodie secret; I continue to run into friends who heart this place too, like my friend George, who grew up in Mill Valley and tells me that Sun Fat has been well-loved by regulars for over 20 years! 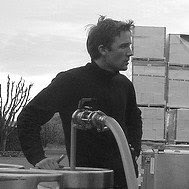 Advice From a Pro
My friend Jason Berthold just wrapped up a solid stint as one of the two sous chefs at The French Laundry, and he's put the most recent vintage of his Courier label syrah and sauvignon blanc in bottle.

Next he'll be running the kitchen at RN74, the Michael Mina/Rajat Parr wine bar going into the Millennium Tower in SOMA in April 2009 or so; food writers all over town have already started clamoring for the assignment from their respective editors, who -- like me -- can't help but add to the buzz.

Before his next gig gets crazy, he's got a free moment here and there to advise bro's on things like cleaning and grilling calamari.

Cleaning Your New Squid Friends
It's easy, though not for the squeamish. It takes maybe a half hour to clean about a pound of squid, but the glory is worth it. Sun Fat doesn't always have the local squid, unfortunately; they offer pre-cleaned squid daily, but it's flown in from China -- not the fresh choice, nor the sustainable one.

Select the smallest squid at the market, with bodies 3-4 inches long not counting the head and tentacles; they're the most tender. Basically, you want to use the tentacles and the body casing, and you want to get rid of the head, eyes, guts, and clear plastic-y quill.

1. (Optional) Rub off the mottled, purpley skin under running water. Or, like Isa Restaurant, leave the skin on, which, it turns out, is no less delicious!

2. Gingerly tug the head off of the body, and with it you will pull out most of the guts. Careful, if you rupture the ink sac, you'll have extra rinsing to do.
3. Cut off the tentacles at their base just above the eyes, and make a little arc with your paring knife so that you avoid including the tiny poky part that juts from the head into the center of the tentacle base. Throw the head and guts away.

4. Pull out the clear, plastic-y quill, which is attached to the side of the body interior. It might break, so reach in with your finger to get out the whole quill; you can also snip off the very tail end of the calamari and grab the rest of the quill from there.
5. Stick your finger inside the body casing to make sure all gunk is removed. Try not to gag.

The Key to Texture: Salting Early!
Jason told me that the key to a tender, delectable texture is removing as much moisture from the squid as you can before cooking, so that it caramelizes instead of steaming. Salt pulls the water out. Plus, as Judy Rodgers notes in her Zuni Cafe cookbook, salting early and often yields a more moist, flavorful piece of meat, fish, or poultry across the board. So true.

Throw your squid/salt/towel/plastic roll in the fridge for a few hours (even 30 minutes of salting will help!), preferably sandwiched between ice packs to slow the inevitable growth of bacteria that begins the moment a sea creature is fished from its watery home.

Time to Grill!
Toss the squid in olive oil, fresh ground pepper, and a tiny bit more salt, then throw it on a super-hot grill. (Preheat a gas grill for at least 15 minutes.) No grill? The top rack of your oven's broiler should do.

It cooks within a minute or three, and it's a real b*tch to keep up with flipping all of the squid on your own, so if you can get a friend with an extra pair of tongs in on this, go for it.

If you grill the tentacles in little tong-sized masses, then you don't end up losing too much through the grill grates.

Presentation's a Snap
Just slice the bodies into rings, then sprinkle the rings and tentacles liberally with a mess of fresh lemon juice and chopped fresh parsley. Serve on a big plate and make your friends use their fingers. I know it's unspeakably pretentious, but somehow it really does taste better that way!