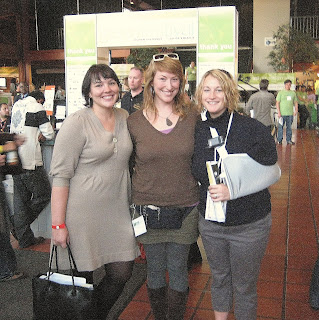 O, the myriad powers of Facebook. Today I hit the Green Festival with my good friend Jesse Locks (pictured, left), one of the folks responsible for Arthur Magazine and an all-around rad events and publishing maven.

Thanks to the magic of the FB, we caught up with Green Festival organizer Vanessa Driscoll (pictured, right), a Carolinian buddy of mine from high school with whom I have not spoken, literally, in 16 years!

It was great to see her. Definitely had some flashbacks to the middle school days of jelly shoes and Hypercolor. O the wonders of the World Wide Internet Web! 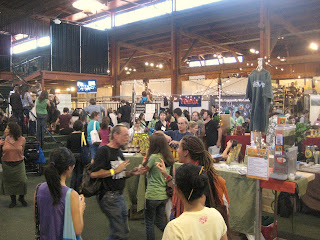 Jesse and I tooled around while Vanessa hit some org meetings, and we found the fest to be very pleasant. The Concourse Exhibition Center was filled with nice green living products, from Seattle's Theo Chocolates and tons of booths of nice looking natural-fiber yoga pants to all-natural mattress makers and biodegradable coffin manufacturers.

(Counted two coffin companies, in fact! I was glad to see them; the funeral industry is so incredibly screwed up, and someone needs to be working on alternatives.)

There was even a booth hawking a DIY bidet kit. (Seriously.) 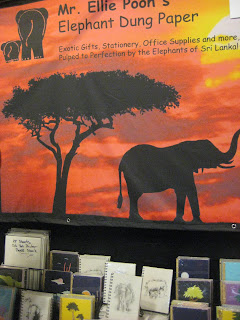 We also found paper made from elephant poo...apparently they've been doing this in Sri Lanka, like, for-EV-er. That's what the dude said. 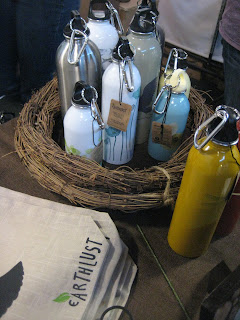 Found this water bottle company that's a local alternative to the wildly popular Sigg metal bottles; Earthlust is made here in San Francisco in the Mission District!

And the babes working the booth were cuuuuuuute.

But more importantly, the designs are nice, like silhouetted birds in flight and that sort of thing, you know, the art that us alternative types like to wear on our casual T-shirts these days. 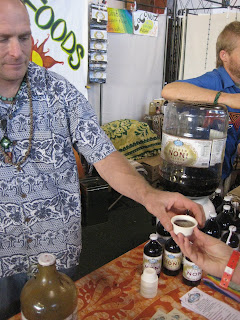 After visiting the Capay Organic farm booth for fresh orange slices more than once, we got snookered into trying something called Golden Noni Elixir by the guys at Bright Earth Foods from Talent, Oregon.

It's raw juice of the Tahitian Noni fruit, which apparently is about as packed with active enzymes as it gets. 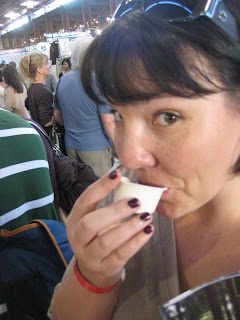 
It tastes pretty horrible, but not too much worse than Fernet if you hate Fernet. I love Fernet but I still hated it. Does that make any sense?

They said it would make us feel good all over. 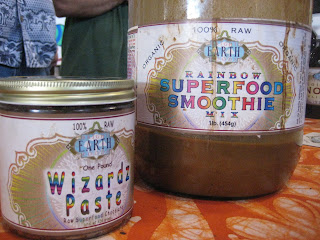 I admit to feeling a little strange in the ensuing half hour, but maybe it was from also sampling both the Rainbow Superfood Smoothie Mix (which tasted kindof like a blendered peanut granola bar), as well as the hilariously named Wizardz Paste, which is pure cacao pod ground into a wet, grainy mess with things like acai, blue-green algae, ginger, mesquite, cayenne, stevia, coconut oil and pomegranate.

It was alright. Nutty, dark, dense, and only 3% delicious.


The way I figure it is this: let's support these crazy hippie companies once in a while, right? You know you love a good gimmick, and so do I. That's why I have lavender salt in my pantry and flax seed oil in my fridge.

That said, I didn't buy any Wizardz Paste. Or Noni Juice.

But I do still feel a little weird, in a good way.