Bambi nuggets, oyster roasts, and catching your own 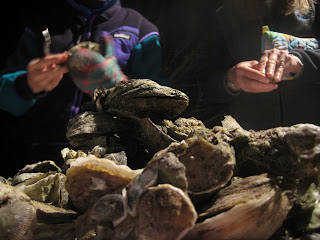 My cousin family has some trade secrets when it comes to food.

One of them is the magical tradition of taking a cold fall evening up at Lake Wateree, and cooking up an insanely giant pile of steamed oysters (not so secret really) and Bambi nuggets (OMG).

The outdoor oyster roast is quite the wonderful South Carolina tradition, but it was never a part of my childhood or adolescence.

I don't regret this; my childhood and adolescence were jam-packed with a terrific mix of the horribly embarrassing, the average so-so boring, and the wildly fun, so I shan't complain.

My first oyster roast was behind someone's beach house down near Charleston, S.C. maybe, one summer when I was working for the Spoleto Festival U.S.A.? Or was it during a trip to the Lowcountry with my friends Laurel, Christy and Frankie? I was over 21, in any case, so drinking beer was no illicit thrill.

What was, was seeing a giant pigpile of oysters get dumped onto a giant, searing hot metal plate atop a pit full of embers, covered with burlap sacks, and hosed down with the garden hose so they'd steam open real nice.

The only condiments? Saltine crackers and cocktail sauce. And light beer.

Naturally, I was taken with the whole affair.

I've been to a few great, grand oyster roasts since, but only a few. So the opportunity to enjoy this magical Southeastern tradition with family was a true delight. 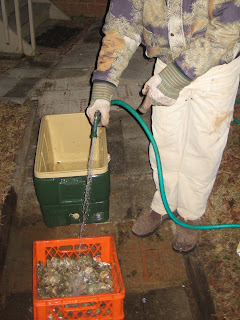 My great uncle leads the proceedings with a thorough shellfish washdown.

His oysters are from Clifton's Seafood on Decker Blvd. in Columbia, SC, a.k.a. International Blvd, which you wouldn't be so quick to call it if you'd been around when Oakland, CA's International Blvd was all full of riots after the Raiders lost the Super Bowl. Remember that, California friends? Ha!

My great aunt Sue and my Mom used to go get fried seafood baskets for lunch at Clifton's after rambling out to Marshalls to scope out the sweet specials on housewares and such.

(I still do that. Scored a SWEET All-Clad extra large flared roasting pan there last year for way less than half price.) 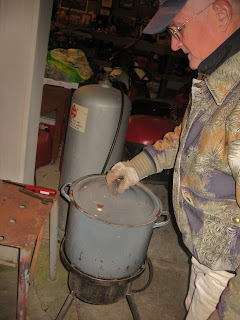 Then GrandBob fires up his insanely large, doomsday-appropriate propane tank and heating apparatus.

That propane tank is about twice as big as it looks in the photo, STG.

The big cookpot is outfitted with water for steaming, and a trimmed-down, curved grill (like the kind you use to net in the charcoal on a mini-Weber grill) to keep the oysters from touching the too-hot bottom of the pot. 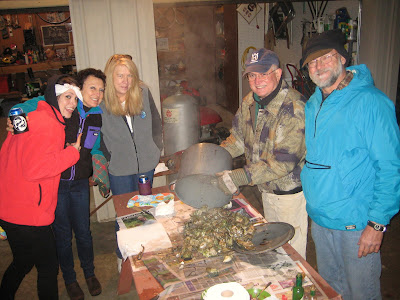 How cool is my family? Seriously, though. Look at all them smiles. Those are some super rad humans. I love those guys. 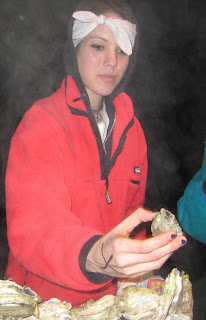 Breezy loves them best of all. She and her mom share a special oyster roast nickname, but that's a private family matter.

Let's just say that no oyster will be left unshucked at this party.

After everyone disperses for a rest, we reconvene for the Bambi nuggets.

Bambi nuggets are like chicken nuggets, but made with venison brought in from the wild by my great uncle's own hand. I don't hunt, but I appreciate the way my family takes responsibility for their own meat eating by hunting, killing, and slaughtering their own meat.

It ain't no easy job like going to the Piggly Wiggly. 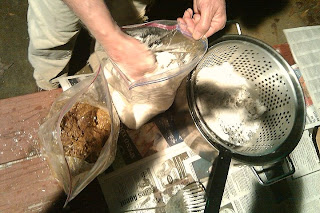 Since deer meat is red meat (and a very lean, delightful red meat, at that), Bambi nuggets are really more like chicken-fried steak nuggets. OMG.

GrandBob marinates the venison pieces for 24 hours in a proprietary mix of teriyaki, onion, and mustard, among other things, then flours them up and lays them into the fry basket in shifts.

"Yep!" he replied, focused on the task at hand.

Happily, GrandBob could care less who's being a snobberina about yellow mustard, especially when he knows how amazing Bambi nuggets are, and I do not yet, and *especially* when he is managing a giant pot of boiling oil. 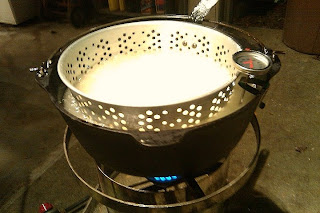 BTW, did you know that you can't buy venison (deer meat) in the state of South Carolina? I didn't.

This discourages poaching, says my relatives, and makes my cousin Owen's Xmas present to me one recent year, of a pound of deer burger from a deer he took down with a bow and arrow, about a frillion times more special. 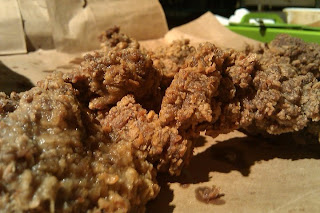 So you can imagine how excited I was when I got invited to enjoy my first-ever outdoor feast of oysters and Bambi nuggets -- a.k.a. "mustard-fry venison" -- prepared by my venerated great uncle Wilbur -- a.k.a. GrandBob.

OMG those freakin' nuggets were amazing. Like a cross between what you wish a really great chicken fried steak would taste like, with a tinge of bright yellow mustard kick, but tender and fresh and incredible and foresty.

Let's just say that whatever nickname Breezy and her mom are called due to their oyster lust, mine would be similar as pertains to the mustard-fry.