I haven't written a super-indulgent food nerd blog post in a while, as I've been focusing on healthy, garden-y stuff. Thanks to you, this trend is changing -- right this very moment. 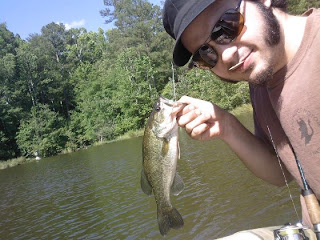 Remember when you gave me that pound of ground, frozen venison for Christmas 2009? And I was so very excited? Especially when I found out that you had shot the deer yourself? With a freakin' BOW and ARROW?

I have always been impressed with your skills as an outdoor sportsman, what with all the fishing, night hiking, camping, alligator-catching, and such.

But now that I have had the chance to cook that pound of deer meat you gave me, my appreciation has just skyrocketed.

I've always been leery of the whole practice of hunting for sport -- and I always will be. Furthermore, I admire vegetarians and vegans to the max, aspiring to be like them despite my deeply ingrained (albeit more and more sporadic) meat lust.

However, considering the cruelty, waste, and un-sustainability of our industrial meat production, packing, and distribution systems, I think that people who are willing to catch, kill, clean, process, and prepare their own animal flesh are on the right track. (Especially in a state where deer overpopulation can be a very real issue for those living in rural -- and even not so rural -- areas.) 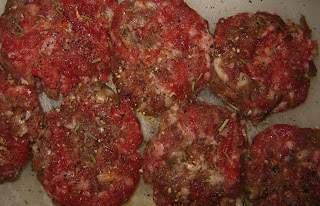 MAGICAL VENISON MINI-BURGERS
The other night, my friend Anne and I (along with her rad 3 year-old, the Tank), decided to make a late evening meat snack. 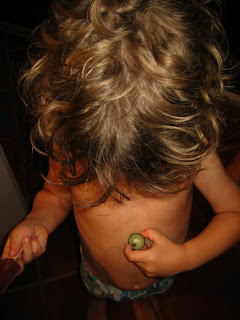 The Tank helped out by attending to crucial tasks like trying to fit small things into his belly button and repeatedly calling out for "SAUSAGE MEEEAAATBAAALLLSSS!"


(While eating a no-corn-syrup popsicle. Cause it's vacation.)

Before sauteeing the burgs in a heavy-bottomed frying pan, I pulled out another not-so-secret weapon: 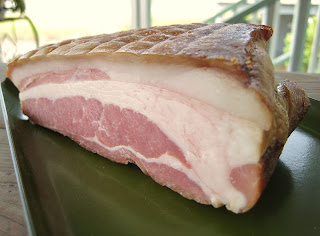 A giant hunk of local, sustainably-raised Caw Caw Creek bacon -- to which Motor Supply Co. Bistro Chef Tim Peters had done secret, delicious things in his house-curing process -- and which I was lucky to acquire as a parting gift at the restaurant's 20th anniversary dinner.

I had frozen the hunk of smoky meat magic for just such an occasion as this one.

Did you know that frozen bacon is much easier to cut into a small dice -- especially if you have a good, heavy, well-sharpened cook's knife?

This bacon hunk is so formidable that it even dices fairly easily if you thaw it out in advance, like I did. (But why did I thaw it if I didn't have to? I guess because it was in the same freezer bag as the venison. Still. I'll be honest; I know a lot of things, but I randomly go airhead sometimes.) 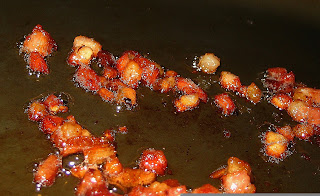 Cousin Owen informed me that he had personally processed this batch of venison with some good applewood-smoked bacon, in an effort to add marbling and juiciness-producing fat content to this otherwise incredibly lean red meat.

So cooking the miniature deer burgers in bacon drippings -- especially those from pork that had been grown, processed and cured by local guys I know personally -- seemed mega approps to me. 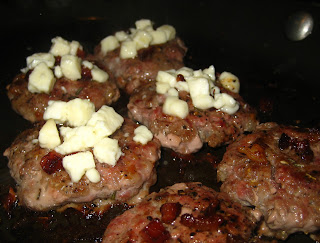 Topping some of them with some crumbled Farmhouse feta cheese and the crispy diced bacon? Even more approps, to be honest.

The lightly gamey taste of venison partners perfectly with Greco-American treats like goat feta. (Btw, I learned recently to avoid the Publix feta. That stuff is as flavorless as the bottom of a tennis shoe.)

Word to the wise: follow Cousin Owen's advice (echoed by his sister, the erudite home chef and ed. tech. guru Cousin Emily), and cook your venison "slow and low."

Cooking lean game on low heat until the meat browns? Good call. Otherwise, just like grass-fed beef, the deer meat *could* dry out, especially if it wasn't processed with any other animal fat. 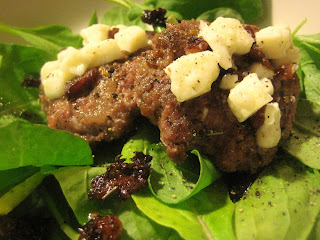 MAGICAL VENISON SALAD with FETA and ARUGULA
Anne, in her infinite wisdom, pulled out some organic arugula and suggested we make magical little meat salads, topped with bacon drippings and little diced bits of bacon.

(We might have even drizzled a little spicy chipotle vegan mayo on this, but by that point we were too busy eating to take any food nerd photos.)


Inspired by Anne's creative turn, I got to thinking that maybe I could find a way to pair some of our "SAUSAGE MEEEEAAATBAALLLLLSSS" (yes, the Tank was still shouting for more -- we think he might have downed like 4 of these suckers) with some of the green shiso leaf I'd ever-so-nerdily grown from mail order catalog seeds.

I was introduced to green shiso leaf, a.k.a. green perilla, in San Francisco at a number of the more fun and exciting sushi spots, most often in a spicy tuna roll. 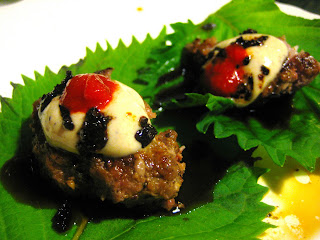 SPICY SHISO VENISON SUSHI
What if you put a half of a venison/bacon mini-burger onto a fresh shiso leaf, drizzle with tamari (or shoyu, or soy sauce), top with vegan chipotle mayo, and garnish with Sriracha hot chili sauce and crispy bacon drippings?

You get Spicy Shiso Venison Sushi.

Call it whatever you want, but maybe make a few extra.