From the moment the shoddy plastic-lettered sign went up on the corner church's lawn reading, "YOU COO WE COO WE ALL COO FOR BBQ -- MAY 2 -- PORK CHICKEN" I began hearing tell of legend: the best Carolina-style, mustard-based, pulled pork BBQ in all the land. 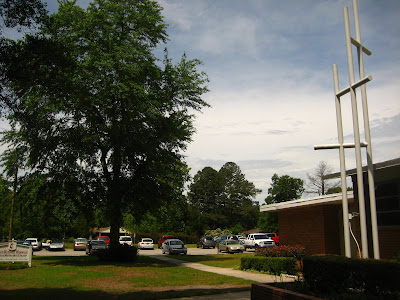 Things like, "My buddy Jim Bob -- you know, the musician/health food guy -- he says this stuff is the best he's EVER had."

And "My buddy Tim waits all year for that church BBQ thing."

Naturally, I had to check it out.

I spend a fair amount of time in my hometown of Columbia, South Carolina nowadays (to say the least), and while I like to keep my Bay Area coverage rolling, I've got to share the wealth once in a while when it comes to the Southern gems. 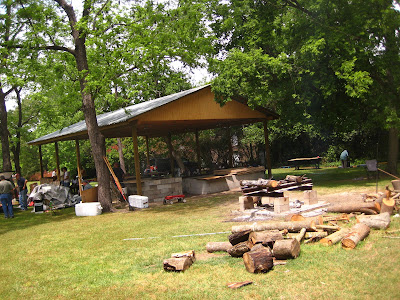 Walked over to the churchyard in question last Saturday and followed the smell of embers and meat. 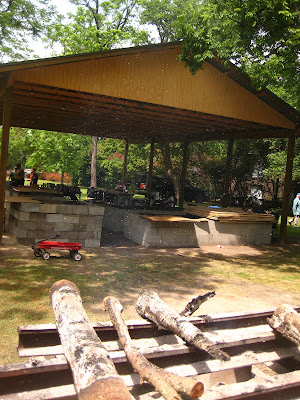 This shed is usually dead empty, but it bustles during this regular event, the proceeds of which, apparently, make up an astonishing percentage of the church's annual operating funds. 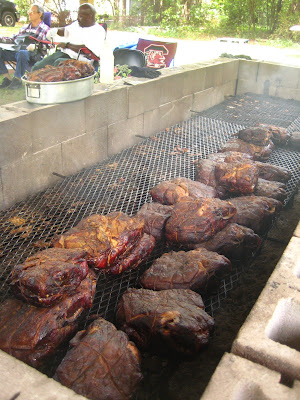 Um, they're obviously not messing around, with all those pork butts and/or pork shoulders they're slow-roasting.

And that's not even the half of it -- they'd already pulled a ton of meat off the grill and shredded it into giant metal canisters.

Canisters which were then rolled across the lawn on handtrucks to reach the meat-n-three assembly line that the church ladies had set up in the church building. 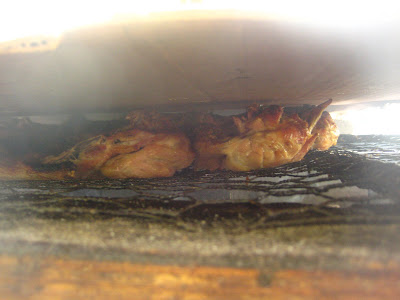 Why put your grilled chicken under a brick when you can lay a giant slab of wood on top of a mess of chickens instead? 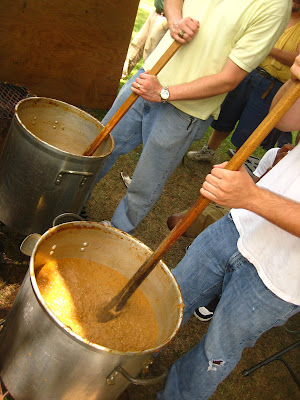 If BBQ hash (everything but the squeal!) weren't so dang delicious, I'd be terrified of this scene. But I know that what's in those giant metal buckets is likely pure gold. 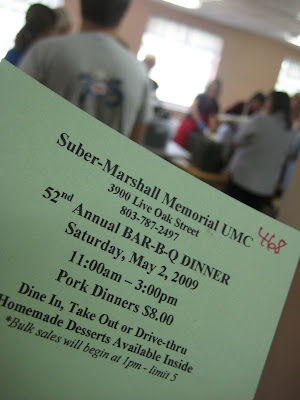 Time to get in line. 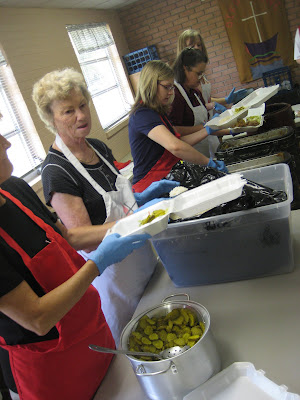 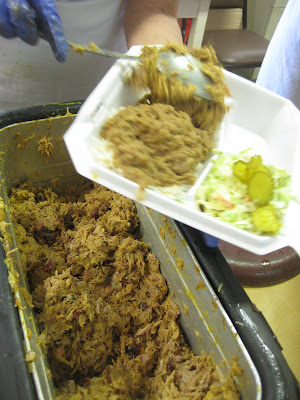 In this context, meat-n-three consists of shredded BBQ pork in a mustard/vinegar sauce, rice, BBQ hash, and not-too-mayonnaisey coleslaw in a styrofoam to-go box.

No, hash and rice aren't vegetables, but who cares? 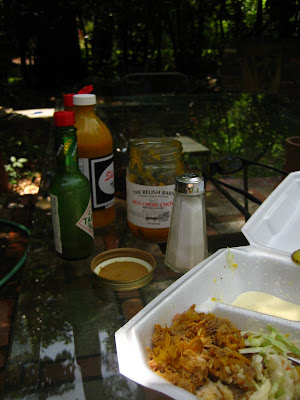 The hash was a little on the sweet side so I doctored it with some hot, vinegary chow chow relish and some green Tabasco. (LOVE that stuff!)

Shealy's mustard-based BBQ sauce on the side, just cause it so good.

Didn't even think to take a photo til I'd decimated the whole heaping mess with a frosty Bud Light, but you get the idea.


Can't wait til the next one!