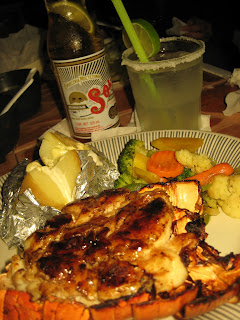 I was just recalling fondly the best grilled lobster I've had in a long, long time. (Well, since a fabu Monday Lobster night at Rosso Trattoria last year. Which isn't actually that long to be honest.)

This lobster was flippin' great.

Nice and browned on the outside, moist and yummy on the inside. I would like to eat one of those right now, actually.

But it wasn't just the lobster that was great. 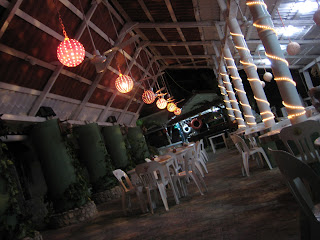 The lobster was procured for my belly from this huge, sprawling all-porch-all-the-time, outdoor restaurant called El Veradero de Oscar, located far from all the other restaurants in the main part of tourist town, way down the main North-South road on Isla Mujeres. (Note: There is also an El Varadero, which is a Cuban place on the bay, mid-island, as well.)

Ya, that dreamy little funky vacation island off of Cancun, Mexico + the Yucatan Peninsula.

We happened upon El Varadero de Oscar on a golf carting expedition on the North-South road between Playa Norte and the Sac Bajo road -- where Villa Rolandi and Playa Lancheros and the floating plastic bottle island and the Tortugranuja are located.

We thought, "Hm, that place is on the waterfront, they have a lobster tank with little miniature *grottos* in it where the lobsters hide out (the guy showed us when we popped in in the middle of the afternoon, not hungry but just curious), and their light fixtures are old fish net buoys with mod-retro holes drilled in them."

Um, yeah. Kindof no question there. 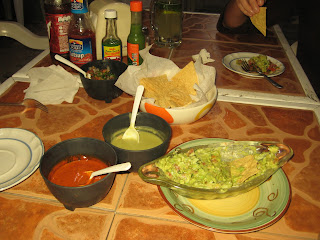 So we made a point of taking a taxi back down there for dinner one night.

It was a great decision. We are very smart. We were the only ppl there -- which was a little weird feeling, but it was also really great. (It's really far from the very pleasant, albeit very busy and touristy, zone of Playa Norte.)


There was optimal deliciousness. There were cold, tasty top shelf margaritas. There were many delicious salsas and fabulous guacamole. There were boats clinking against one another ever so gently in the marina right there. 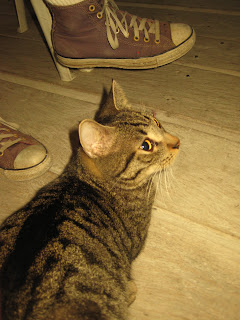 The trend of many hungry, skittish little island cats continued at El Varadero de Oscar, but this cat was different -- she liked getting petted.

So I snuck her bits of lobster skrittle (that's not a real word) and petted her and drank great margaritas with Debi and loved that Derek discovered the apple-flavored soda, Lift! 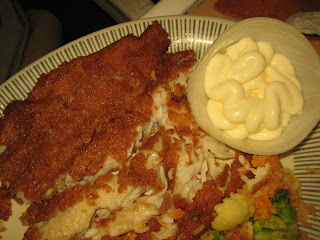 Oh, and Debi's man Derek ordered this fried fish that was beyond insanely out of this world delicious!

There were cinnamony cinnamon overtones to the breading, perhaps with some allspice or nutmeg? Who knows. It was awesome.

Oh, and that mayonnaise? It's in an onion layer cup. That's right, a cup made from a layer of onion flesh. I'm SO stealing that idea for a dinner party (but maybe not the gross squeezy mayo look). 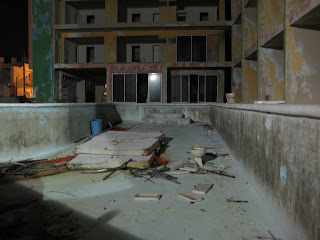 After we taxi'd back to Playa Norte, I went for a nighttime walk (yup, Isla Mujeres is weirdly safe like that) over to the eastern side of the island, which was beaten up super horribly by a hurricane a few years back.

A lot of properties on that shore still haven't bounced back. 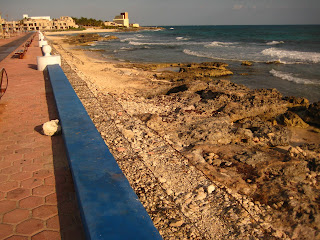 That side of the island, all rocks with no real beach, is 100% amazing for finding sea glass, btw. 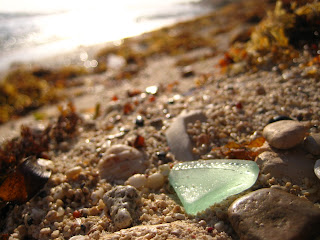 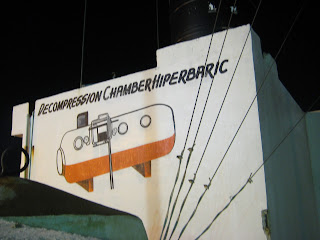 Back to the nighttime walk.

I continued strolling around like an American lady on vacation, and I found...the hyperbaric decompression chamber!