O how I love this. 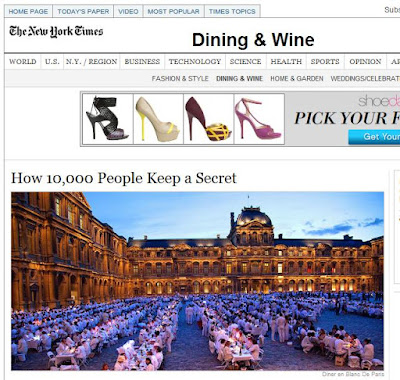 Excerpted from The New York Times:

"DRESS CODE Notre Dame was one of two sites for Paris's Dîner en Blanc. Guests, all in white, brought their own tables and food.

Three weeks ago, in the golden light of an early-summer evening, thousands of Parisians dressed entirely in white converged on two of the city’s most picturesque locations — 4,400 of them in the plaza at the cathedral of Notre Dame; 6,200 in a courtyard of the Louvre — for a feast that was neither advertised nor publicly heralded. They had brought along not only their own epicurean repasts but also their own tables, chairs, glasses, silver and napery.

At midnight, after dining and dancing, they...(read more)"

Thank you, Anna Redwine, for showing this to me!
Email Post
Labels: dinner event party picnic