Yet another of Chris Ying's fabuloso, star-studded food writing seminars at 826 Valencia (a.k.a. McSweeney's, a.k.a. the place where celeb author Dave Eggers hangs his hat): 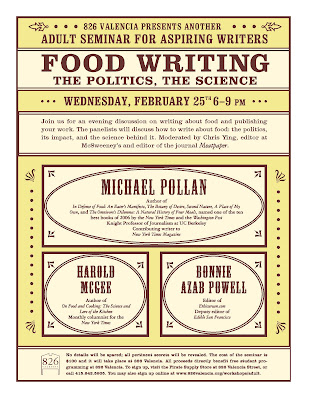 
Join us for an evening discussion on writing about food, and publishing your work. Our first food writing seminar, held in November, proved so popular that we wanted to have a second. This time our focus will be narrower, concentrating on the politics of food, its impact, and the science behind it. The conversation will range from discussing the themes addressed as well as how to turn thoughts, arguments and theories into palatable prose.
In addition to reflecting on the writing process, the panelists will address issues related to the publishing aspects of food writing, such as contacting agents, working with publishing houses and newspaper editors, and running a successful blog. Each panelist comes to 826 with a unique experience and approach, and their combined expertise should prove an invaluable resource for aspiring and seasoned writers alike. No details will be spared, all pertinent secrets will be revealed.

Michael Pollan is the author of In Defense of Food: An Eater’s Manifesto, published in January 2008 by The Penguin Press. His previous books include The Omnivore's Dilemma: A Natural History of Four Meals, named one of the ten best books of 2006 by the New York Times and the Washington Post; The Botany of Desire; Second Nature; and A Place of My Own, pictured here. Pollan is a contributing writer to the New York Times Magazine and is a Knight Professor of Journalism at UC Berkeley.

Harold McGee writes about the science of food and cooking. He started out studying physics and astronomy at the California Institute of Technology, and then English literature at Yale University. In 1984 he published On Food and Cooking: The Science and Lore of the Kitchen, which he revised and enlarged in 2004. In 2005, Bon Appétit magazine named him food writer of the year. In 2008, Time Magazine included him on its annual list of the world's most influential people. He writes a monthly column, "The Curious Cook," for The New York Times.

Bonnie Azab Powell is a freelance writer and editor who has written about food politics for the San Francisco Chronicle, Mother Jones, Sierra, Gastronomica, Meatpaper, Grist.org, and elsewhere. She is also the editor of the group blog Ethicurean.com, which she started in May 2006; the deputy editor of Edible San Francisco magazine; and manager of Clark Summit Farm's meat CSA.

Chris Ying will be moderating the event. Chris is an editor at McSweeney's, where his current projects include writing a children's book about where food comes from, tentatively titled What If I Ate This Boot?. In addition, he manages the Voice of Witness oral history book series, and is developing a how-to guide on hosting "miracle berry" flavor-tripping parties. While in college, he worked as a line cook in Bay Area restaurants for four years, and now cooks once a week for Mission Street Food. He is also an editor of the journal Meatpaper, and tries to maintain a food blog called Plebiscite.

* * *
You may reserve your spot for our upcoming Adult Seminar by check or with a credit card through Paypal below. The cost is $100. If you have questions, please email seminars@826valencia .com.

To pay through Paypal, check the title, date, and cost of the seminar and then click 'Sign Me Up!'
Food Writing: the politics, the science
February 25, 2009
$100