Tikinxic Fish, from the Yucatan to My Skillet

I got a little obsessed with Tikinxic fish down in the Yucatan. 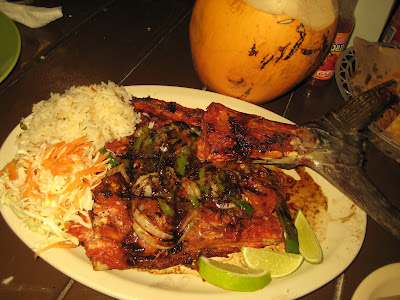 How could you not? Fresh, local, whole tropical fish, basted up in a dark red paste of achiote, garlic, oregano, and sour orange juice, then grilled.

(A la parrilla means grilled over charcoal, while a la plancha means sauteed on a flat metal griddle. Important distinction. We learned it -- after a couple of *meh* fish fillet dinners.) 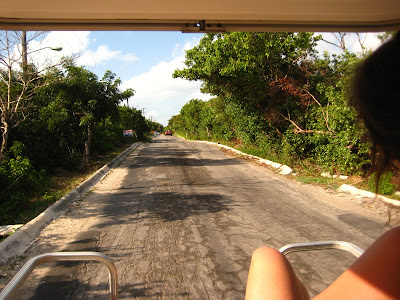 The place we got the Tikinxic fish on Isla Mujeres is one of those legendary beach bars, a ways out of town.

We traveled there by golf cart. 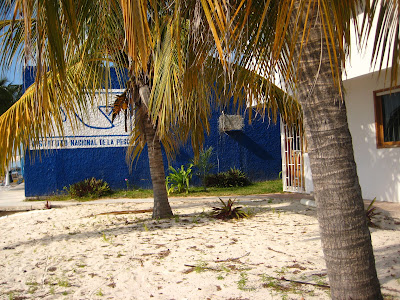 Before lunch, we stopped off at a few places. 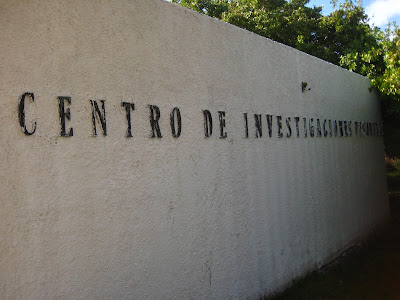 This turtle farm (the Tortugranja) has a long ago, faraway Team Zissou feel to it.

Also a little bit like the TV show "Lost." 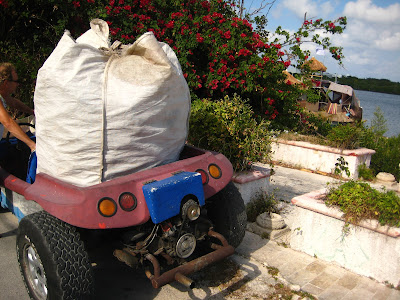 We also checked out the floating island made of plastic bottles!

It's maintained by a revolving crew of volunteers.

We happened to be puttering by when a giant bag of plastic bottles was being dropped off by some nice hippies.

The house is in the background, with a palapa roof. 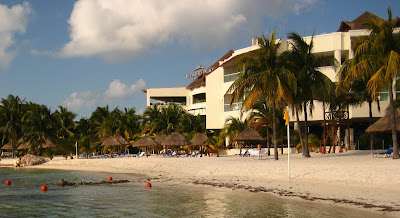 Then, we took a tour of the Isla Mujeres Palace, one of those big All-Inclusive resorts we'd looked at before deciding to go all indie.

I don't know if you can tell, but there is like, nobody at this resort. The buffet food didn't look great -- at all, there weren't any bartenders around, and the place had a general pall that just wasn't very vacationy feeling.


We adjourned to our beach bar next door with happy hearts that we had chosen wisely by staying on Playa Norte, a block from downtown, on a gorgeous beach at the Ixchel Beach Hotel.

Time to self-congratulate with some margaritas, a Sol, and some fresh fish. 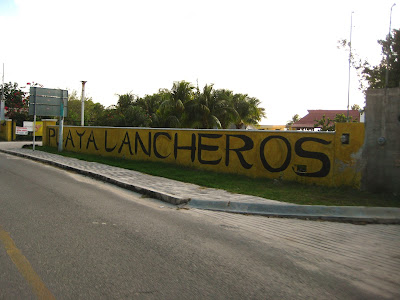 The fish place to which most peeps on Isla Mujeres will send you to is called La Casa del Tikinxic, and it's one of a handful of laid-back beach bars/restaurants/clubs in a stretch of beach called Playa Lancheros.

We saw one of the hot restaurant hosts from downtown Isla Mujeres having a late canoodle-y lunch there with his lady, so it's confirmed -- the hospitality industry likes it too. 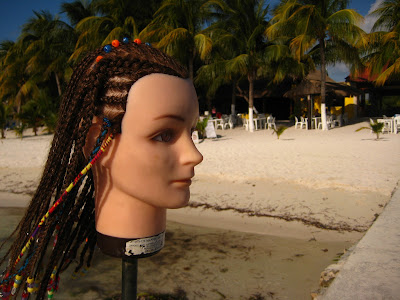 It is on a beautiful Caribbean beach, where you can totes get your hair braided while you wait for your fish to grill.

Isla Mujeres is near Cancun, kindof like Folly Beach or Bolinas in spirit.

Can you see the spirit? 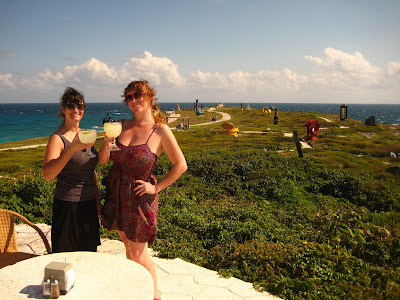 Mexico is a pretty wicked good place to visit. I love it there.

This is where we stopped for a margarita at a blufftop contemporary sculpture garden (at Punta Sur) on  Playa Lancheros golf cart day.

Thanks for being so awesome, Mexico! 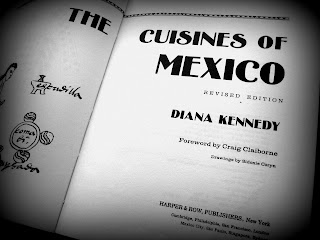 Now that I'm back home, I hunted up my Diana Kennedy book, Cuisines of Mexico.

She is the gringa who broughteth the truest Mexican cookbookery of her time from Mexico to the U.S. after many years as an expat there.


I had some wild salmon thawing from the All-Local Farmers Market here in Columbia, SC. That place is the radness. 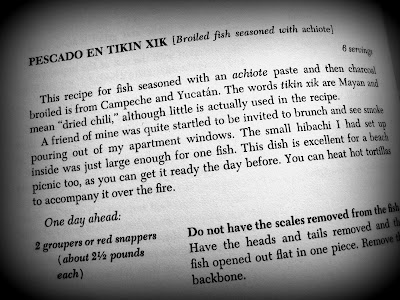 Decided to look up the Tikinxic and see if I could pull it off. 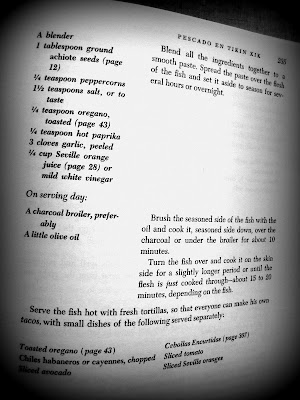 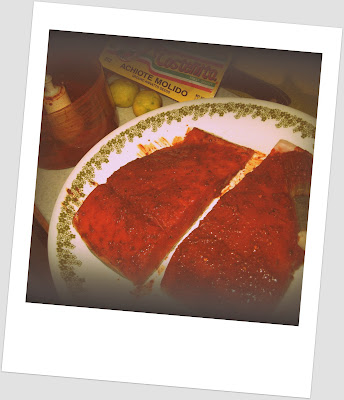 As one might have guessed, El Mariachi on 378 in West Columbia has pretty much every Mexican thing you need for cooking. 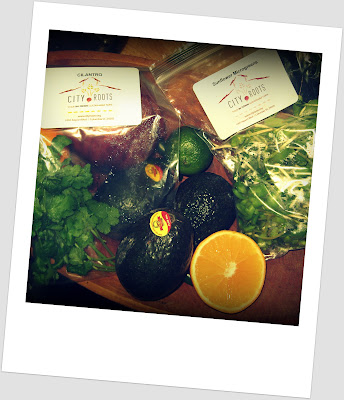 The cilantro and sunflower microgreens from City Roots urban sustainable farm make a tight garnish on this dish. 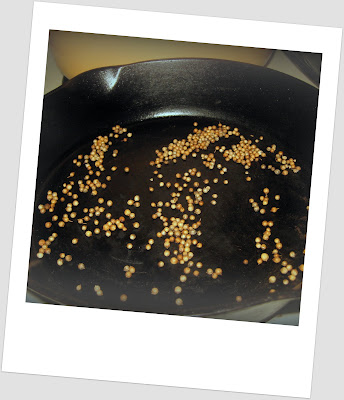 So I followed the recipe, and took the abovementioned salmon brushed in freshly made achiote paste, and let it rest a while.

I should note, however, that Seville oranges (sour orange, or naranja agria) seem to be a real pain to find in the US. They were all over the grocery stores in Mexico, of course.

I toasted some oregano, black peppercorns, cumin and later, some whole coriander in my grandmother's hot cast iron skillet.

Diana taught me that it makes them more fragrant. Si, claro. 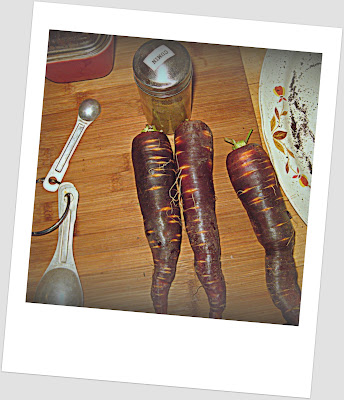 Meanwhile, I chopped onions and City Roots purple haze carrots for a big pot of beans. 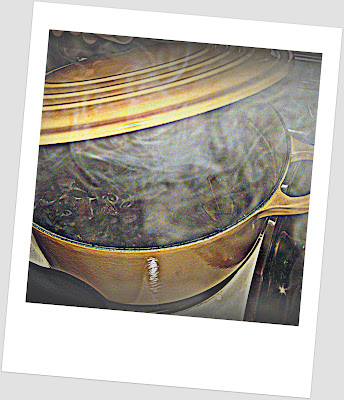 It's cold up in here. Bean time for the week ahead.

1. I put epazote in my black beans. Diana advises it, and the Mexican grocery sells it in the dried herbs area.

Supposed to help with human gassiness.

And it tastes great. Adds a bright herbaceous quality to one's beans.

2. I put a stick of dried kombu seaweed up in there, too, per the advice of nutrition maven Roxanne Koteles-Smith. Also good for gas. And nutrients!


...about a 1/2 cup of leftover turkey stock I'd made after I bought a 12 lb. brined, bourbon-glazed smoked turkey from Bone-In Artisan BBQ on Wheels at Xmas time. Yeah, dawg. 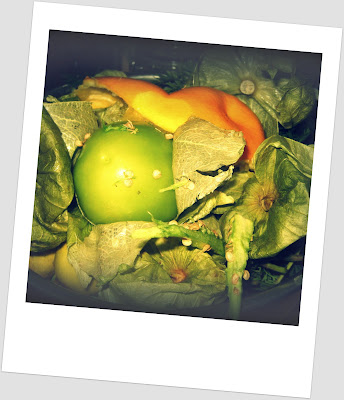 While everything else is going down on the stove, I'm chopping 4 mid-size tomatillos, a mango, a big jalapeno, a very small onion, a few sprigs of cilantro, and I'm squeezing like 4 of those tiny little key limes they sell at the Mexican market out at the US 1 Flea Market on Saturdays.

Man those are good and tart!

This salsa is going to be so good I already want to drink it. 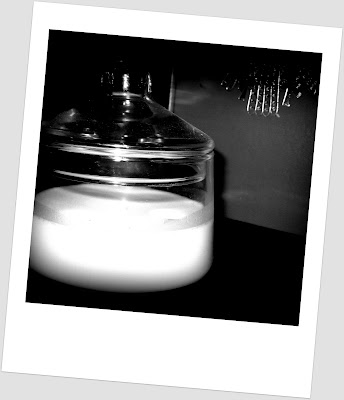 OK, time to griddle the fish. If it weren't so cold out, I'd grill it on the charcoal parrilla, but the plancha's just going to have to suffice because I don't want to face the coldness of starting the grill, even.

BUT I can fake the charcoal grill taste by dropping a teaspoon of rich, smoky Caw Caw Creek Pastured Pork bacon drippings into Grandma B's skillet.

I like to keep my bacon drippings in a dainty glass candy jar. 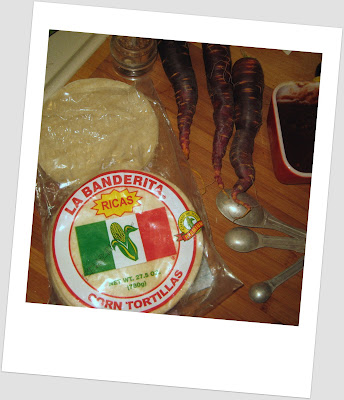 Meanwhile, I've got a big French skillet heating up to fry my tortillas for tacos.

I like to brown them just so they have crispy patches on the outsides but chewy, soft, bendy insides.

This brand, La Banderita, is still my fave. Pliable. Tasty. 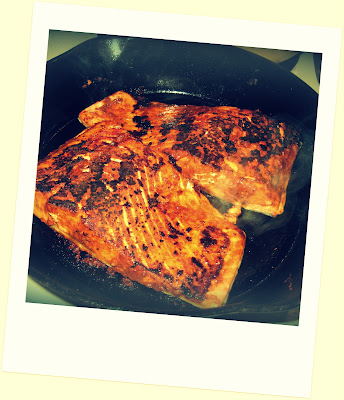 This salmon from the salmon girl at the All Local is slammin.


(I have been wanting to do this achiote thing for almost a decade. Holy grail of cooking moment!) 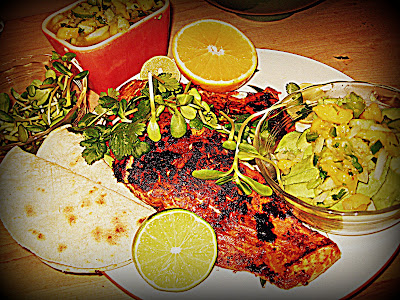 Now it's time to plate it all, as though we're in a cooking show remake of Fantasy Island.

Diana has her recommendations for garnishes, and they are great.

I am skipping the habanero because that stuff is too hot for my gringa mouth.

And skipping those Seville oranges that are impossible to get.


As soon as you get your presentation looking real cute for your bad self, then you rip it apart like a wild animal and make tacos. 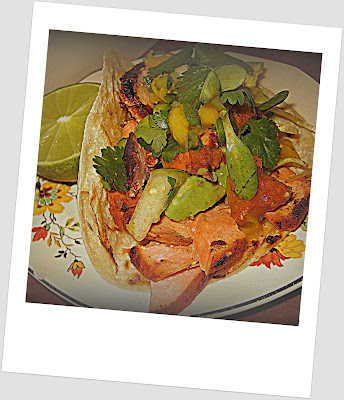 So...what's the verdict? Did the recipe live up to the reality? Especially considering all the frou-frou Tracie Broom twists?

Success, my friends. This stuff is flippin' unbelievably good. I can't wait to eat it again. Cause guess what's on the menu for tomorrow? LEFTOVERS IN TACOS.

Buen provecho, dudes. Thanks for coming on my culinary nerd journey with me.


*Taco season is when you have all kinds of yummy stuff prepped and ready to go for making any one of like, 4 different kinds of tacos, at any time.