Green Dispatch from a Red State

Personally, I'm pretty excited about the spanking new sustainable urban farm and tilapia fish hatchery being built on repurposed industrial land in my hometown of Columbia, South Carolina. The big S.C. newspaper, The State, just ran a profile on the project, helmed by retired green architect Robbie McClam and his family. (I grew up around the corner from the McClams! Hoot hoot!).

Read about it here! http://www.thestate.com/local/story/981662.html 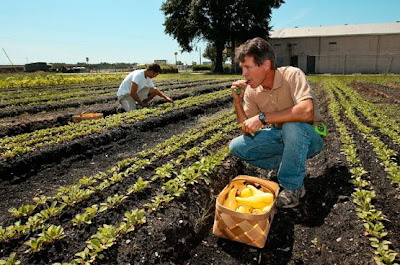 "Tucked away in a three-acre former vacant lot in Rosewood between an empty warehouse and an industrial laundry is an odd sight: an organic farm and fish hatchery.
"This is no backyard garden. It is a completely sustainable farm - within the city limits.
"From worm dirt up, architect Robbie McClam is creating a closed-loop system to grow micro-greens, vegetables and, eventually, two-pound tilapia fish. And it's all at 1005 Airport Blvd., within a stone's throw from...(more)"


This in the same week that our local CBS affiliate, WLTX, ran a video about our local Slow Food movement! http://slowfoodcolumbia.blogspot.com/2009/10/slow-food-columbia-featured-on-wltx.html

BTW, About This Whole South Carolina Thing
Moving my base of operations from San Francisco to my hometown of Columbia, S.C. in the past year, I have been very, very impressed with and inspired by the efforts put forth by area farm-to-table and shop-local movements, the contemporary art scene, and other progressive-minded, organized groups here in the state's capitol. (The alt. music scene has always been secretly terrific, Hootie notwithstanding.)

Despite those Limbaugh Fans
Republican lugnuts like Sen. Joe Wilson ("You lie!") and Gov. Mark Sanford (the Argentine affair) give South Carolina a bad name. Yes, there's a preponderance of conservative, narrow-minded nimrods in ballcaps and khakis and camo flak jackets here, and there's still a freaking rebel flag on the statehouse grounds (at least they took it down from the roof dome, but still -- ugh.)

BUT: what's great is that Columbia is a small pond -- and it's a university town. When a progressive wants to make a difference, the splash is fairly big! It's very easy for progressives in S.C. to knit together and get things done; everyone knows each other (and if they don't, they're one oyster roast or art opening away from meeting), and because the pace of daily life is a little slower and more relaxed here, people have considerable time to volunteer and donate their time to rad causes.

Socio-Cultural ROI
Plus, the Bay Area's "preaching to the converted" phenomenon is less of an issue; there are a lot more socio-cultural "swing voters" here, so the ROI on social and cultural activism is significant!

In recent months, my goal has been to keep The Yum Diary's food coverage fairly general in scope (recipes, key ingredients, national interest pieces) instead of focusing on one geographical area, which was the initial idea when I started this thing in the S.F. Bay Area in July 2008.

Still, once in a while I like to share what my fellow Southerners are up to. Especially when it's RAWESOME!!!