(I know, that sounds just the tiniest bit dirty.)

Vegan yeast gravy, made with nutritional yeast flakes (available in bulk at your health food store, also ideal on popcorn), is one of the most delicious things I have ever put in my mouth.

My friend Laurel's mom (a silver fox!) always made it for their healthy brown-rice-and-vegetable dinners when she was in grade school (and still does), transforming a fairly bland, ordinary meal into a luxe, creamy, salty-good delight. 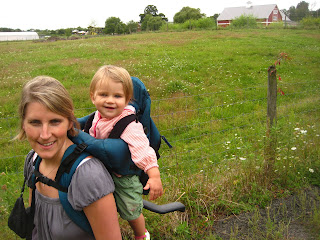 I recently visited Laurel and her own little nuclear family. After hitting a local farm for incredible Jersey tomatoes, the absolute freshest, greenest, loveliest okra I have ever met, creamy farm cheeses, and honeycrisp apples, we cobbled together a delicious late summer dinner. 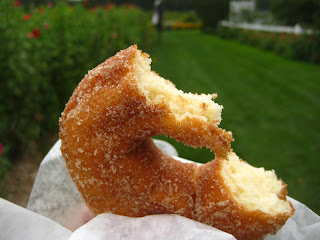 (First we ate a bunch of apple cider doughnuts at the farm. Let's call that the appetizer course.)

Laurel and her husband (who holds the distinction of pulling off one of the finest senior year pranks our high school ever did see) are primarily vegetarian, so while it wasn't surprising, it was VERY EXCITING TO ME that the leftovers rattling around the fridge included a half-pot of -- that's right -- the magical yeast gravy of yore! (It reheats beautifully over low heat with rewhisking.)

So here I am, craving vegan yeast gravy and it's 8am. So I go for it.

You want to go for it? Here's how. 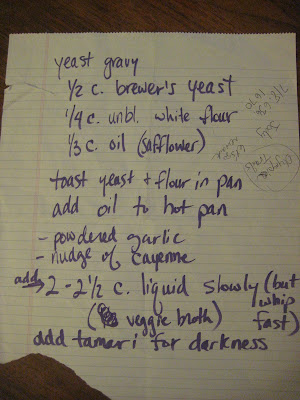 1. First, toast 1/4 cup flour and 1/2 cup nutritional yeast in a skillet/frying pan. NOT BREWER'S YEAST! Even though it says so in the photo. I was not raised on health foods! So sometimes I get confused. Laurel assures me that brewer's yeast is thoroughly nasty tasting. I prefer not to find out for myself!

Then transfer to a smaller, higher-sided saucepan. (You don't have to, but it's better -- if you're willing to wash another dish.)

4. Sprinkle some cayenne, garlic powder, and paprika to taste. 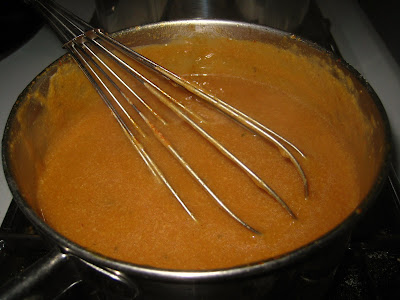 By now your gravy should be glossy and velvety thick, easily coating and clinging to a spoon. YUM!! 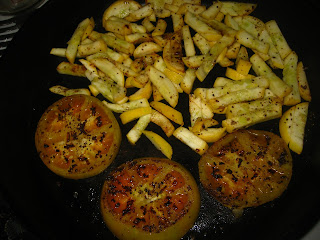 Serve over anything resembling rice and vegetables. Me, I made some brown rice and sauteed some yellow squash and green tomato slices in my cast iron. 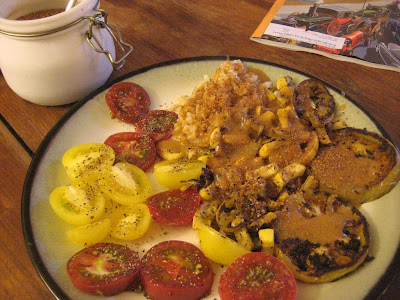 Garnish with something acidic like fresh garden heirloom tomatoes (these are some Black from Tula and Jaune Flammes!)

Sprinkle with gomasio and you're good to go!

What is gomasio? Roasted sesame seeds and sea salt, pulverized in a food processor or blender until coarse. SO GOOD. Not sure of the ratio so you'll want to Google it. We keep ours in the fridge for long life and happiness.


One caveat: This gravy ends up tasting remarkably like fried chicken, despite being completely vegan/vegetarian.

Now, I LOVE fried chicken, so I'm super into it. But my sweetie, he eschews meat as well as anything that tastes meaty, so I have a feeling it's not going to float his boat*. But we'll see at dinner! Cause I'm going to eat this again. Tonight.

xoxo
tb
*The gravy passed muster with gusto. I've made it 4 times in the last 2 weeks and the sweetie loves it so much he actually sneaks and sips it like soup from his spoon after "accidentally" ladling "too much" onto his plate.
Hooray!