Learning to Love the Biggest Nut in the Barrel

What to do with a big bag of Brazil nuts that no one wants to eat? Make pesto!

I had bought 2-3 cups of shelled Brazil nuts in bulk for my sweetie as a special treat, as he had mentioned that he and his brothers used to fight over the Brazil nuts whenever they were lucky enough to encounter nut mix as kids.

When I presented this big bag of specially acquired nuts to him (kept in the freezer to ward off rancidity), he did not seem thrilled. In fact, he revealed that he doesn't really even like Brazil nuts. The light bulb went off; I had misunderstood his childhood tale.

Just because a young boy fights over the biggest nut in the barrel doesn't mean he goes ape for them as an adult. And I think we can all agree that Brazil nuts just haven't ever really been that tantalizing. 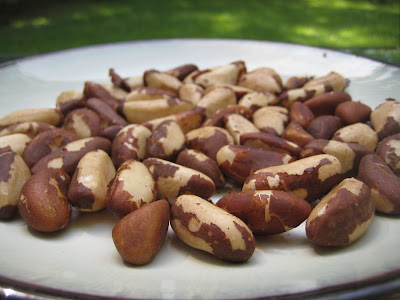 First, roast them at 350 or so for a good 20-30 minutes, monitoring closely so they don't burn. They really take a good long while to roast thoroughly!
(While Brazil nuts are the richest dietary source of selenium and are only wild-collected for international trade [a good thing for the forests], they also contain the most saturated fat of any nut, more than macadamias, even! Don't tell your trainer.) 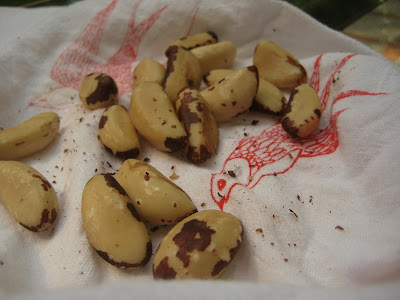 Then rub the skins off, preferably in a hand-printed tea towel by my friend Gina Pericini, whose super affordable Flock Home Linens are featured in the September issue of InStyle Magazine. (Woot woot!) 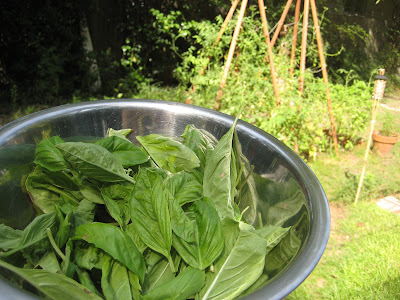 Next, get a mess of fresh basil.

(Very) loosely following the pesto recipe from the Silver Spoon cookbook (gifted to me, so graciously, by my friend Wendy), but subbing in brazil nuts for pine nuts of course, throw the following in a food processor:
(I tripled the recipe, roughly)
- 75 basil leaves
- 1 cup so or Brazil nuts
- 1/2 cup+ olive oil
- generous salt
- 1 cup or so shredded or grated parmesan cheese 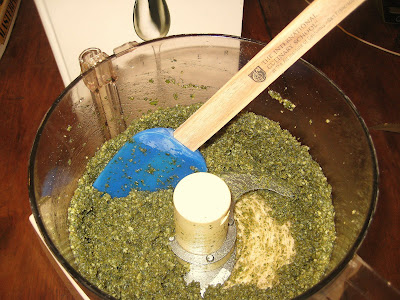 That's right, friends. No garlic! Doesn't even need it. (Note the sweet spatula I got as swag at a food writers' event at the new International Culinary School in San Francisco -- a sweet facility at the Art Institute of California that deserves some PR!) 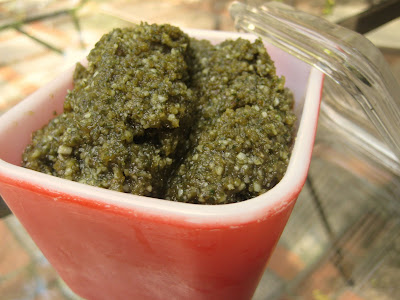 And there you have it: a voluptuous Brazil nut pesto that tastes very much like regular pine nut pesto, but with a tad more oomph.
I tossed a half cup of this stuff with a half package of hot, freshly boiled spaghetti noodles and handed it to my sweetie.

It was devoured in moments!

p.s. Notice that awesome vintage glass storage dish in the photo above? I had been looking for some of these forever, ever since loving/coveting the ones my friend Tali uses, and then my awesome stepmom called me up recently (not knowing a thing about my ongoing search) and told me she'd found some groovy vintage glass storage containers at a garage sale that she thought I might like.

Um, how awesome is that?