These Green Tomatoes Will Kill Your Cholesterol

Um, here's a real, real good reason to eat more green tomatoes. (Aside from the fact that fried -- or, more healthily, grilled [see recipe below] -- they are DELICIOUS.) 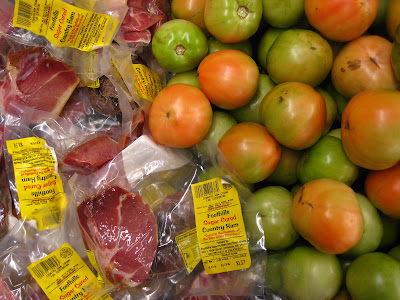 I noticed a piquant headline by my fave food science author, the legendary Harold McGee, whose New York Times column, The Curious Cook, continues to up the worth of the paper.

(Tweets are thus flying re: usage by the likes of chefs Grant Achatz and Heston Blumenthal, while bloggers seem befuddled and comment-leavers manage to bear an insight or two.)

Since green tomatoes are an epicurean staple in South Carolina (and readily available at the store) my southern friends -- like The Shop Tart*, who is as much a sl*t for my grilled green tomatoes as I am for her pan-fried crabcakes -- will appreciate this healthy tidbit.


"There are significant quantities of tomatine in green tomato fruits, which people have long eaten fried and pickled. And tomatine appears to be a relatively benign alkaloid.

In 2000, Dr. Friedman and colleagues reported that when lab animals ingest tomatine, essentially all of it passes through the animal unabsorbed. The alkaloid apparently binds to cholesterol in the digestive system, and the combination is excreted — ridding the body of both alkaloid and cholesterol. The researchers found that both tomatine-rich green tomatoes and purified tomatine lowered the levels of undesirable LDL cholesterol in animals."

Seriously, though. That is AWESOME. I have five green tomatoes in my fridge that I bought at the farmer's market the other day. I am so grilling their taut little green a*ses tomorrow.

(1.) Slice green tomatoes parallel to their equators (you know, as if their tops and bottoms were North and South Poles), making slices 3/4 inch thick. Don't lose the jelly and seeds!! 'Tis the tastiest part.  (2.) Liberally dress, brush, or spray the slices with a high-temp oil like peanut (best flavor), canola, grapeseed, vegetable, et al.  (3.) Scatter each side with good salt and freshly ground pepper. Maybe even a little sugar if you're feeling naughty. (4.) Grill on an insanely hot grill long enough to hash down some fancy grill marks, then bump the grill down to medium for a couple of minutes on each side til they soften and get all caramelized-y. Or whatever. You are a good cook. Grilling is not hard.

Eat em up! I like mine sprinkled with homemade gomasio (roasted sesame seeds + salt, ground up coarsely), but of course it's going to taste even better if you spoon some good pimiento cheese on it. (Duh.)


xoxo
tb
p.s. McGee's article continues to describe the use of tomato leaves in recipes, the best known being Paul Bertolli's from Cooking by Hand, 2003, although McGee trips down some delicious-sounding avenues involving dried tomato leaves, fish sauce and halibut. I want to eat that.


*You should bug The Shop Tart for her vidalia onion/squash/blue cheese quiche recipe, btw. Oh brother, that lil fashion plate can cooooooooooook.

****
photo: TB, from my favorite indoor farmstand, the Cayce Farmer's Market, where they actually sell sidemeat. For real.