Creamed spinach is my most recent Mashed Potato Mountain. 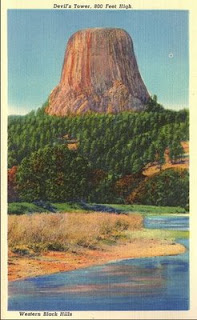 You know, the thing you obsess over, making it again and again (per Close Encounters...), until you replicate that dancing sugarplum, Devil's Tower, or in my case, that souffle dish of piping hot, meltingly savory chopped spinach touched with just enough butter, onion, cream, and cheese, all browned against the edges of the baking dish and so ridiculously good that one side order is never, never enough? 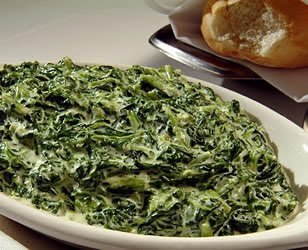 But how to make this thing I hadn't had since sneaking into a Ruth's Chris steakhouse a few years ago with my brother to celebrate a special occasion?

( I try to eschew chains but sometimes I slip. And that Ruth's Chris creamed spinach, despite not technically being gratineed, is righteous, left.)


The Hunt for Green October
I looked through my mother's fairly amazing collection of local, spiral-bound Southern church cookbooks from the 50s to the 80s, but all I could find were weird spinach casseroles in which cream cheese figured prominently. (I'm sure they're divine, darlin, but not now, thank you.)

Then I snooped into my own contemporary cookbook collection. Not surprisingly, neither the Zuni Cafe cookbook nor Richard Olney's Simple French Food were packing.

Diana Kennedy's Cuisines of Mexico? Yes for ID'ing the chiles de chilaca growing in my garden that were supposed to be serranos and *so* aren't (but when I dry them they will be pasillas!), No for nailing down classic American steakhouse dishes.

So I hit the World Wide Internet Web. Peter Luger's? No recipe. Embarrasingly, Ruth's Chris had a recipe on their corporate website. I hit cut and paste. Epicurious had a few recipes from back issues of Gourmet and Bon Appetit. Cut, paste. The Food Network had an Emeril version which looked decent. OK. Getting somewhere. Common threads: onion, butter, cream, spinach. Still no cigar.

What about the blogs? Big Oven had a really good looking recipe, with all the bells and whistles: nutmeg, cayenne, parmesan, whoosh! But I was still missing the "baked" element -- all of these were in-the-pan or bowl preps. I wanted a gratin feeling with my classic creamed spinach.

Greensleeves
Then I found The Good Home Cookbook, which really seemed to nail it down. My take on their recipe: follow the proportions only loosely, omit the garlic, add a touch of fresh nutmeg and cayenne, throw in some cream, and ultimately only use half the bechamel you've created so you have a critical mass of spinach (but still a totally decadent amount of creamed), and: fold in a few tablespoons of diced, aged white cheddar.

(Which leaves you a whole thinger of bechamel for the freezer! Booya!) I used a medium-sized bag of baby spinach (I know, weak) and a box of frozen spinach (weaker!!), but I'm too American to wash my own spinach, apparently. 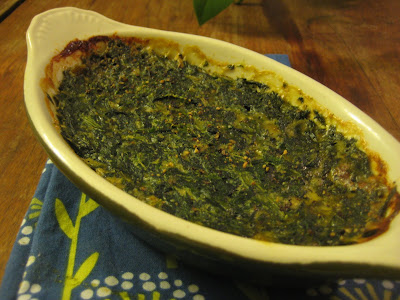 I Cream, You Cream, We All Cream for...
JFYI, I had creamed spinach four times last week. IT WAS AWESOME!!!!

Thank you to my terrific stepmom Janice, who let me have her four terrific, individual serving size, boat-shaped, pleasantly olive green baking dishes at a recent garage sale for zero dollars and zero cents. I use those dishes all the time now!


[We'll have to use them for Mashed Potato Mountaining that Swiss chard gratin from the Gervais & Vine 3-course last month, no?]