As we near the end of deer season, the hunter's spoils come the way of the lucky. You can't buy or sell local wild game meat in South Carolina -- if you want it, you have to hunt it -- or be on a hunter's gift list.

My cousin Owen, a fearless master of beasts who usually hunts with a bow and arrow, "'Cause a rifle is too easy," took down a buck recently and butchered it himself, which I think is thoroughly fierce. Generously, he gave me a big, honking bag of fresh venison, as red and lovely as great, grass-fed beef, but leaner and fresher to the nose.

I tweaked a great venison bourgignon recipe I found on a blog called A Spicy Perspective: 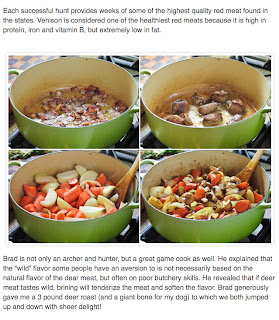 Go to that link above for the recipe. My tweaks:

I added 4-5 stalks of celery, didn't bundle my fresh herbs (just threw 'em in), used beef stock, and might have been a little heavy-handed with the bacon. You've got to love any dish that requires an entire bottle of red wine, no? 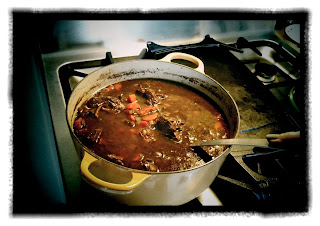 I used Gnome Grown oyster mushrooms from the Soda City Farmers Market instead of crimini mushrooms. 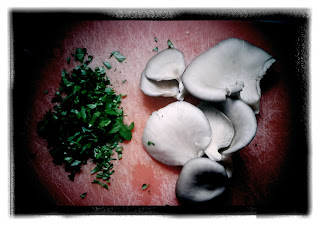 Oh, and this is important: I simmered it overnight for about 8 hours on super low heat on the stovetop. My heavy lidded Le Creuset cast iron pot was essential for that, so that none of the steam or liquid could escape from inside while cooking.

In the morning, I consulted Mastering the Art of French Cooking by her highness Julia Child to see if I couldn't be taught an old trick: making brown roux. (I like the above recipe's shortcut of making a butter-flour paste, but I was in the mood to nerd out.) 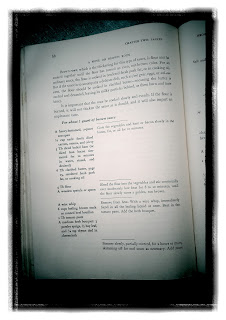 I used bacon fat and grapeseed oil and locally milled Adluh Flour to make my roux. Reincorporated it after much whisking with cooking liquid in a separate saucepan, and bang: gorgeousness. 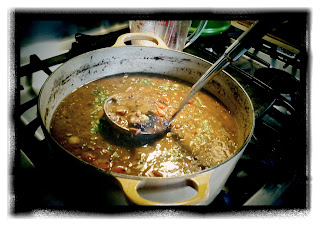 Fresh gigante parsley from the yard, a little Maldon sea salt, and it was done. So awesome. I can't believe it had been so long since I'd made any variation on Beef Burgundy, or Boeuf Bourgignon, if you're feeling snooty today.

Going to revisit that recipe soon, for sure!