While visiting friends in Italy, I am enjoying as man old man liqueurs as humanly possible. It is not hard, as a bottle of Campari is like 12 bucks, and they sell it at the grocery store. 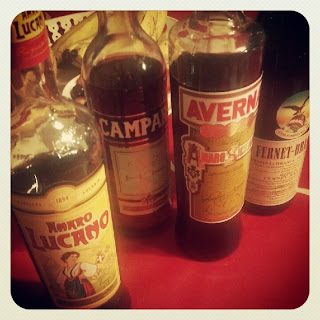 I knew already that I loved bitter, rooty, lightly sweet Averna, an Amaro I first tried at a dinner at Rosso Trattoria back home in Columbia, SC. Then I found a bottle of Amaro Lucano in my hosts' liquor cabinet -- it is pretty similar, but a little smoother.

(We're out in the country at the home of dear friends in the far-flung Marche region near Ancona (in Macerata province on the east side of the country), no major cities in sight, so there is blessedly little to distract me from my personal little old Italian man festival.) 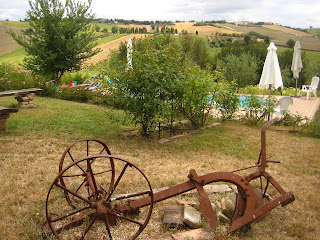 I was already in lurve with bitter, herbaceous (and let's face it, borderline nasty) Fernet from my days as fancy restaurant server in San Francisco. Pretty fun to just throw it in the grocery basket at less than half the price than in the States. 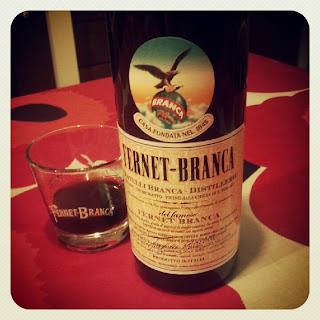 Is part of the appeal the fact that the bottles are slathered in gorgeous, old-timey graphic design and illustrations? Never underestimate the power of good packaging. I am a sucker for it.

At the beach the other day at Porto Recanati, I had the great pleasure of choosing from many, many little old man liqueurs at this beachfront liquor bar. (Btw, good luck getting any sort of "normal" liquor in Italy. Embrace the old man festival.) 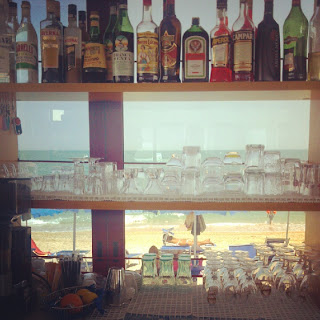 Amaro Montenegro might be my most favorite thus far! Bitter and a tad sweet like Lucano and Averna, but much lighter and less syrupy. (Nice Averna glass in which it was served!)

Pretty delish with a macchiato caldo. 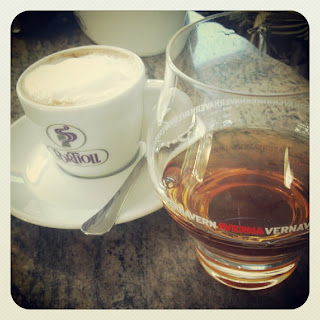 Apparently it is socially illegal to order a cappucino after 10:30am in Italy. So, people cheat (including me) by ordering macchiato, an espresso "marked" with foam.

After a casual beachfront lunch like this with The Shop Tart, a digestivo and a macchiato were just what the doctore ordered. Grigliata di pesce (grilled fish on the American translation) apparently means a bunch of random fried fried. This is good. 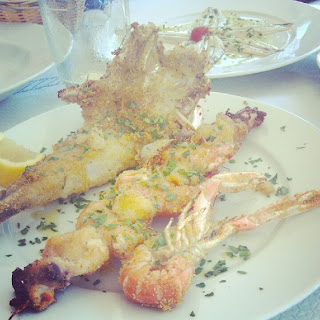 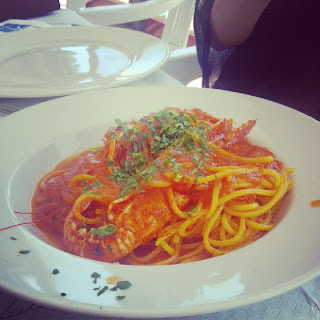 Also? In the Marche region, they like to serve the local white wine varietal, Verdicchio, all fizzed up from a tap. Um, it is delicious. 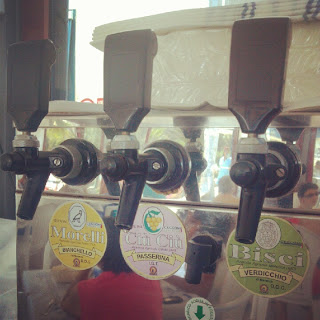 Y'all know how the little old man inside me feels about a beach chair and a beach umbrella. At the Italian beaches, there is pretty much no other way.

That? Oh, that's the Adriatic Sea. No big deal. Just chillin' in Europe. (This is ridiculously surreal.) 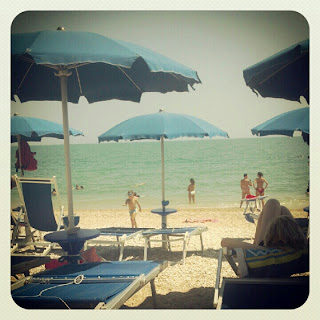 Fired up after a beach day, the three Southern girls got the Italian man (the real one, not the imaginary one living inside my head) to go to the IperSimply mega grocery store to get piles of fresh clams and mussels.

Then The Shop Tart commenced to whip up a lemongrass-ginger-coconut broth for all those cozze and vongole that was pretty much beyond awesome. 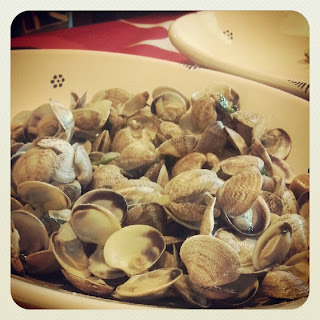 I have no idea how many kilograms of shellfish were demolished by the four adults and four children at the table, but suffice it to say that the only vessel big enough for the empty shells was this giant, Euro-style Beaufort stew pot, which is about a foot tall and 18 inches wide. 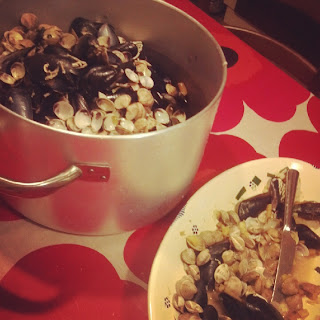 Then, unsurprisingly, it was time for the old man festival to recommence. Averna Amaro, some Blonde Redhead on the iPod stereo, and a few rounds of Rummikub and Bananagrams on the porch. 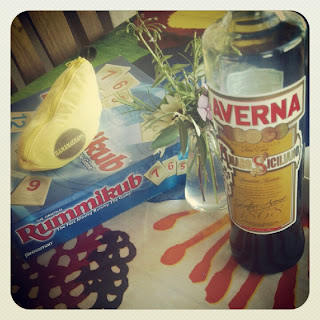