While researching some event branding details for a scriptwriting client just now, I found this scintillating pop culture tidbit on the blog of a big-time party/wedding DJ in Fort Worth, TX. 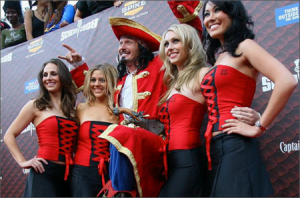 His contract requires him to pose with his left leg raised for all pictures, to look like the logo picture.

However, without a barrel to rest his foot on, he looks more like a dog at a fire hydrant."

Um, that is awesome. In his contract!