I've been off the job for a while, but I aim to be back! Lately I've been making a lot of roasted beet, scallion, kale, and jack cheese quesadillas. THEY ARE DELISH!

So treat yourself to this beety treat! (Hard to find anything but goat cheese as a beet's best friend on the worldwide internet web, but then I found this Wash Post piece!)

Roast a bunch of sliced beets, beet greens, chopped kale and scallions, all spread out on a baking pan in peanut oil, chile flakes, salt and pepper (and a few smashed raw garlic cloves? why not!), at roughly 400 degrees for 15 minutes. Don't crowd your pan! Less is more when it comes to crisp vegetable edges.

Then kick it up to a broil for 10 minutes or so.

Saute up some little corn tortillas and get some jack cheese slices melting up on there. Feeling awesome? Want to get crazy? Use extra sharp cheddar instead! OR aged gouda! WHO CARES, JUST SO IT IS a MELTING CHEESE!

Then lay down some beets, greens and scallions up on there. Fold your quesadilla. Commence to melting and commingling.

Top with fresh guacamole and if you're smart enough to stock it, some green jalapeno hot sauce AND some thick, opaque red hot sauce like Tamazula or Salsa Huichol (my personal knock-down, drag-out favorites).

xoxoxo
p.s. Hard to find anything but goat cheese as a beet's best friend on the worldwide internet web, but then I found this Wash Post piece!

p.p.s. Um, canst thou forgive me for reposting this total non sequitur photo of badger babies from Cute Overload? Um, how couldst I resist!?! 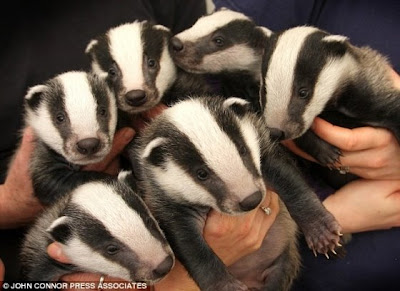